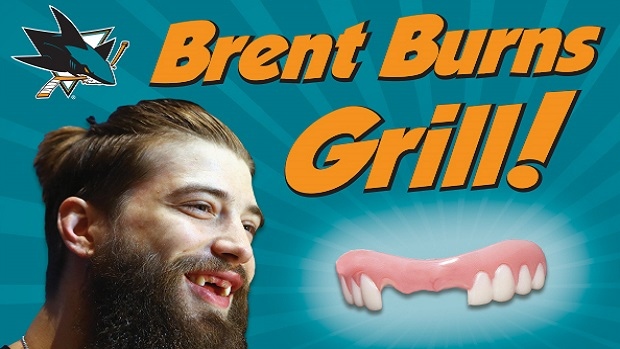 It’s almost as if the longer Brent Burns’ beard grows and the more teeth he loses, the better he gets at hockey. Over the past four seasons we have seen a steady increase in his overall production. With 15 regular season games left on the Sharks’ schedule, Burns has already tied his career high for goals (27) and currently has 43 assists and 70 points on the season, just five assists and five points shy of tying his career high for both categories.

On Sunday, the Sharks are playing their second game of a back-to-back and third game of a six-game home stand when they host the Dallas Stars. While most Sharks fans see the game as an opportunity for the team to build to their lead in the Pacific Division, other see it as an opportunity to go home with one of the best giveaways in the NHL this season.

Every fan attending Sunday night’s game against the Stars will go home with their very own Brent Burns grill so they can mimic the All-Star’s famous look whenever they want.

From Brent Burns and Jumbo Joe Chia Pets to Golden State Warriors Night, the Sharks are one of the best teams in the NHL when it comes to making their fans happy with fantastic giveaways. It’s too bad the beard and flow don’t come with the Burns grill, because then San Jose would be flooded with Brent Burns lookalikes.