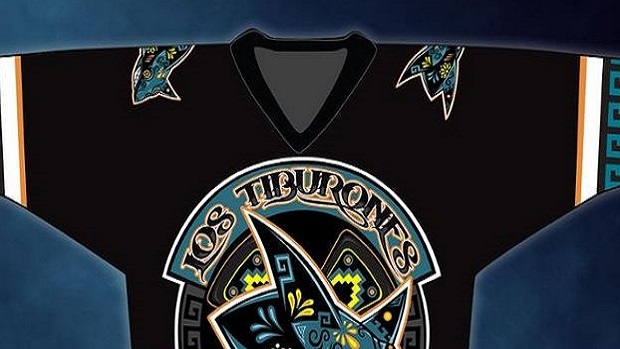 The Pittsburgh Penguins won the Stanley Cup less than two weeks ago, but teams are already preparing for the 2017-18 season as they released their full schedules for the upcoming season on Thursday afternoon.

The San Jose Sharks went one step further with their schedule release on Thursday by also releasing their full promotion schedule for the season.

The team will host a pre-game street rally on Opening Night, but their first real giveaway takes place on Saturday, October 14, when they host the New York Islanders for Hispanic Heritage Night. As part of the promotion, fans will receive their own Los Tiburones jerseys.

It would be pretty sweet if the players rocked these jerseys during the game, but since there’s no third jerseys in the league next year it will most likely only be a giveaway for the fans.

The Sharks have been known to have some pretty sweet giveaways in the past from Brent Burns grills to Jumbo Joe Chia Pets. Unfortunately for Sharks fans, it doesn’t look like there’s any Brent Burns-themed giveaways on the schedule this year.