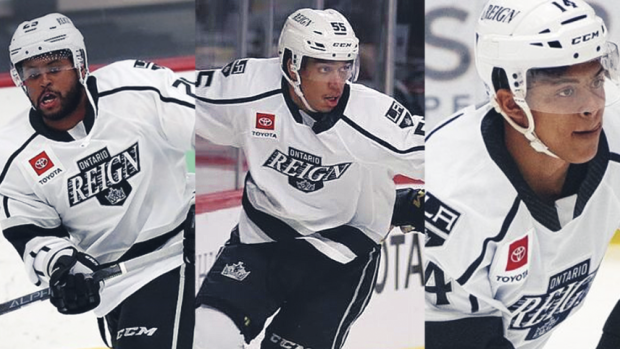 Today is a historical day within the sport of hockey and one that has been a long time coming.

For the first time since the "Black Aces" back in the 1940s, we were able to see an all-Black line in professional hockey.

Devante Smith-Pelly, Akil Thomas, and Quinton Byfield were able to make up the first all-Black line in 80 years when the Ontario Reign took on the Bakersfield Condors Sunday evening.

History being made tonight. Not since the Black Aces have we seen an all-Black line in pro hockey. Herb Carnegie, Ozzie Carnegie & and Manny McIntyre are shining down on @SmithPelly23, @Byfield55 & @AkilThomas tonight. The line already has a goal in the 1st. #History #SoulOnIce pic.twitter.com/ChW5IjfICr

The line worked, too. Quinton Byfield put the Reign on the board first with a breakaway goal in the first period!

Vincent Churchill "Manny" McIntyre, Herb Carnegie and Ozzie Carnegie were able to have the legacy they created back in the early 1940s with the Timmins Buffalo Ankerite Bissons, carried on. With Herb playing centre and his brother and Manny covering the wings, the three were remarkable and helped the Ankerites win two championships.

The Black Aces played within numerous clubs together and became well-known as one of the best lines in minor hockey within the era.

As history has been made with the three young talents on the Reign squad, we can’t wait to see more of these barriers be broken down and moments happen within the game!