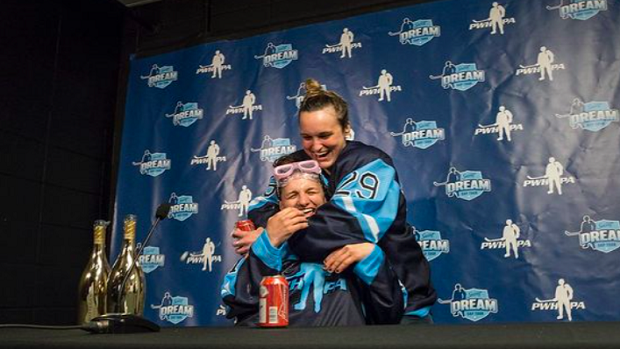 After two disappointing World Championship cancellations (well, one was a postponement, but still) as a result of the COVID-19 pandemic, this past week FINALLY saw exciting and meaningful women’s hockey being played on Canadian soil, and the thrilling tournament was well worth the wait.

While the American side of the PWHPA Dream Gap tour has been able to have a few successful showcases, the Calgary leg that took place this past week was the only opportunity for the Canadian women to showcase their skills this year, and they did just that.

Sunday’s Championship game was a culmination of the tournament, when Toronto and Montreal faced off for Dream Gap glory.

In order to win Championship games, you need your big guns firing at full capacity, and that’s exactly what Team Bauer (Montreal) got out of Team Canada captain Marie-Philip Poulin: but did we expect anything else?

With just over five minutes to play left in the third period, the game was locked up at 2-2. Poulin connected with Jill Saulnier to gain the offensive zone and make a pass to Jessie Eldridge who got a shot off and picked up her own rebound. Eldridge then connected with Poulin at the top of the circle to scored cleanly, and Sarah Lefort notched the empty netter to make it a 4-2 Championship victory.

The final, FINAL SCORE, of the 2021 @SecretDeodorant Dream Gap Tour!

Poulin got first star honours in the contest, and she also got the All-Star treatment following the game. In fact, the whole post-game celebration was completely iconic.

Congrats to Montreal on the victory. We can’t wait to see the world’s best get back on the ice for Team Canada at the World Championships in August!