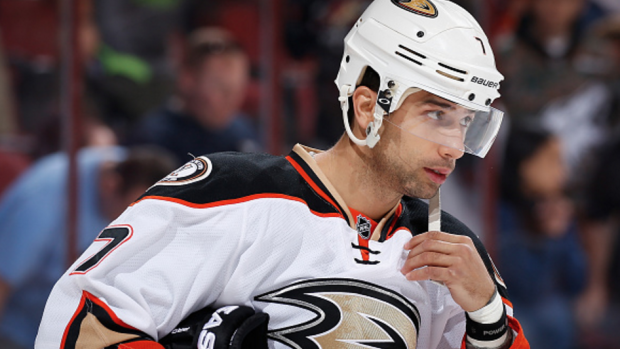 We've said it multiple times, but we'll say it again, hockey players are the toughest athletes in the world in our opinion.  They play through gruesome injuries and put their bodies on the line each and every night for their team.

That being said, despite the toughness of every player, not every injury is one that can be played through, and over the course of an 82-game season the bumps and bruises add up which makes it more difficult for any player to play a full season.

Still, there are some players that just manage to stay healthy and not miss a game despite the bumps and bruises.  These players are the "Ironmen" of the NHL, and Andrew Cogliano of the Anaheim Ducks is one of them.

Tuesday night, Cogliano played in his 738th straight game against the Habs, and he even scored the lone goal in a 5-1 loss, so, in honour of his incredible streak, here are the 5 longest Ironman streaks in NHL history.

Tuesday night was a historic one for Cogliano as he passed Jay Bouwmeester for the fifth-longest Ironman streak at 738 games.

Cog's streak of consecutive games played is the longest active streak in the NHL, but what's even more impressive about the streak is that it started in his rookie season.  In other words, Cogliano hasn't missed a game yet in his career.

Ramsay, who Cogliano can pass for fourth on this list this season, played his entire career for the Buffalo Sabres.

Arguably the most skilled player on this list, Steve Larmer was also a very durable player for the Chicago Blackhawks and New York Rangers.

Unfortunately his streak of 884 consecutive games played, which is still the longest streak by a player with the same team, came to an end because of a contract dispute in 1994.

Like Cogliano, Jarvis started his consecutive games played streak the first time he stepped on the ice, and for setting the record at 964 games, Jarvis was awarded the Bill Masterton Trophy in the 1986-87 season.