Tavares believes hate from Isles fans will make him stronger

All eyes were on John Tavares against the Islanders on Monday night and this time around, he made sure to deliver in the spotlight.

In his second game in New York since joining the Toronto Maple Leafs last summer, JT scored the game-winning goal in a 2-1 victory at Nassau Coliseum. The 28-year-old looked elated after the tally, which came just over a month after his disastrous first return in a 6-1 loss, and his excitement was perfectly captured just seconds after. He’s not usually one to show too much expression, but this photo seemed to sum up how he was feeling pretty well. 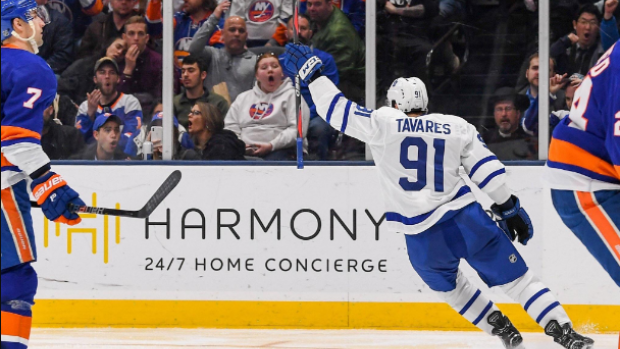 This makes it just a bit better.

Can you guess who scored from these reactions? 🤔😬

To add some extra salt on the wound for Isles fans, the goal marked a couple of milestones for their 2009 first overall pick. Tavares has now officially scored a goal against every team in the league AND set a new career high in points with 87. So yeah, we’re guessing there were salty New Yorkers in the stands.

John Tavares notches the 87th point of his season, setting a new career-high in points. Against his former team, of course.

Speakingggggggg of salty Islanders fans, how about this dude who chirped Tavares while he was in the box. Honestly, we get the frustration, but get over yourself buddy. This is a human being we’re talking about here!!!!

An #Islanders fan absolutely teed off on a penalized #JohnTavares.😲 • (🎥: Twitter/KEITHLAVITT)

The only way these two rivals(?) will be meeting again this spring is if it happens in the Eastern Conference Finals.

Wouldn’t that be something.