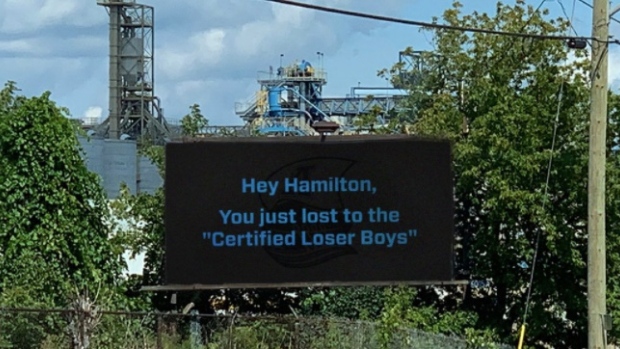 Having a billboard war with another party is honestly the biggest flex of all, because it means that you have enough pull to actually acquire a billboard, and the CFL’s Toronto Argonauts and Hamilton Tiger-Cats have been having billboard wars for the ages this CFL season.

Last week, the GTA rivals went head-to-head in the iconic CFL Labour Day Classic. The Argos, who are snake bitten at Tim Horton’s field on Labour Day, and were 0-6 in the game historically going into it, dropped the game and fell to the home team 32-19. In the midst of the win and Drake’s ‘Certified Lover Boy’ release, the TiCats took the liberty of having this plastered over Dundas Square in Toronto.

The rematch went down yesterday, and a whacky finish in Toronto lead to a 17-16 Argonauts victory. The Argos didn’t forget the ‘Certified Loser Boys’ bit, and decided to shoot back by having this giant message broadcasted in the Hammer.

The third game between these rivals is October 11th, and it’s set to be a very interesting one.