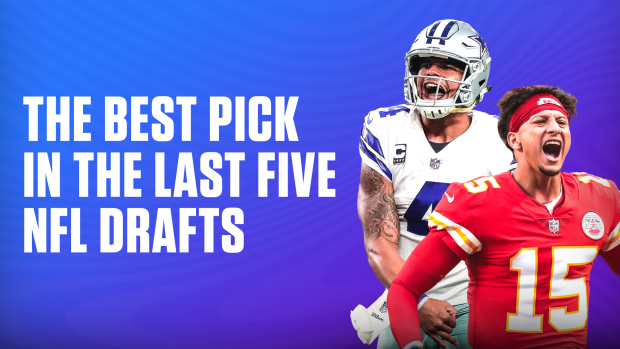 Value is the name of the game when it comes to the NFL Draft.  Every team is always looking for sleepers and steals, and oftentimes top-10 picks might not be the best picks from those drafts because of the value those picks later on provide.

With the 2021 NFL Draft less than a week away, we decided to go back and look at the best pick from each of the last five drafts.

There were so many ways I could have gone with this one.  Laremy Tunsil at 14 was the gift that keeps on giving for Miami and a steal at that spot.  The Cowboys took a shot on Jaylon Smith who was coming off a devastating injury in the 2nd and that gamble paid off.  5 wideouts were taken before the Saints took Michael Thomas in the 2nd (what a mistake by those teams).

Ultimately, I went with Dak Prescott because he's turned into a top-10 QB, he's outperformed every QB from his draft class and it's even funnier to think both LA and Philly traded up for Jared Goff and Carson Wentz who both have not met the expectations of being drafted 1st and 2nd overall.

So petty and so good.

Patrick Mahomes held up 10 fingers after scoring a TD on the Bears.

Remember: Chicago passed on Mahomes in the 2017 Draft. They picked Trubisky at No. 2. Mahomes went at No. 10. pic.twitter.com/yphZBq7MCc

Alvin Kamara, Gerorge Kittle, and Aaron Jones were all picked after the second round in this draft, but to land the best player in football at 10 AFTER the Bears took the first QB of the draft at No. 2 makes this the best pick in 2017 by far.  Mahomes has already won a Super Bowl and MVP honours.  He's on pace to be one of the greatest ever to play the game.  And one QB was actually picked ahead of him.

As Lamar Jackson wins NFL MVP, a reminder of his most ridiculous play of the yearpic.twitter.com/B5Gf5m3W3Q

This one is really between 3 players, Josh Allen, Lamar Jackson, and Darius Leonard.  Seeing as Lamar was the 5th quarterback to go in the 1st round and has already won an MVP, he gets the nod.

He's revolutionized football and he's dynamic in so many ways.  Yes, the playoff numbers aren't there yet, but they weren't for Peyton Manning through his first 3 starts either.  Let's give it some time.  Also, the Ravens. drafted Mark Andrews and Orlando Brown in 2018, pretty good haul for them.

DK Metcalf cried when the Seahawks took him after he slid in the draft.

Worked out pretty well for them. pic.twitter.com/9nv6SlQd8R

With the last pick of the 2nd round, the Seahawks took a swing on a player who impressed everyone physically, but didn't have the production in college due to injuries and scared off some people with specific numbers in combine drills most big-time receivers should excel in.

Metcalf is the exception, though, and the fact that 8 wideouts were taken before him is ludicrous.

This draft is a little tougher because we're only one year removed.  In other words it could change in 5 years, but for now, it's hard to argue Tristan Wirfs wasn't the best pick.

The Super Bowl champs made the selection after they watched three lineman taken ahead of Wirfs.  That selection solidified the offensive line and by all metrics and PFF grades, Wirfs was a can't miss prospect that could be an all-time great when it's all said and done.