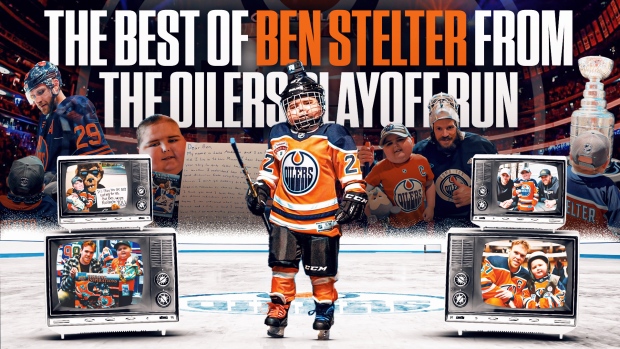 The Edmonton Oilers were just one series away from reaching the Stanley Cup Final for the first time since 2006, but a sweep at the hands of the Colorado Avalanche put an end to their plan.

So close yet so far!

While we feel pretty bad for Oilers fans as a whole, there’s one we feel absolutely gutted for.

Ben Stelter, a six-year-old who is battling glioblastoma, a type of brain cancer, has been cheering for the blue and orange from a young age. On March 24, his life was changed when the Oilers invited him to Rogers Place where he got to meet his idols, tour their dressing room and participate in a pre-game skate. The day ended with Ben being named the “player of the game”, and the rest was history. He quickly became everyone’s favourite Oilers fan.

Ben Stelter, a five-year-old fan battling cancer, was met with cheers as he entered the @EdmontonOilers locker room to serve as captain for the day 👏

Ben was tonight’s pre-game skater, got to meet all the Oilers, and was the Team MVP. pic.twitter.com/qfzlL5QWWP

There’s nothing we’re going to miss more than seeing Ben content. From his one-liners, to playoff appearances, here are our favourite moments of Ben from the Oilers’ postseason.

Ben’s sixth birthday
What’s a better birthday present than winning the Battle of Alberta? NOTHING!

Well would ya look at the time. It's our buddy Ben's 6th birthday! 🎂

“Play La Bamba, Baby!”
Ben has some great one liners but this one topped them all after an Oilers win.

Ben was pumped after the Oilers big Game 3 win!

Pumping up the Oilers
Ben fist pumping the Oilers is all the luck they needed this postseason.

BEN’S GETTING THE BOYS READY!

Ben’s getting the Oilers ready for Game 4! 🧡💙

Receiving love from the enemy
Calgary Flames’ Matthew Tkachuk put the Battle of Alberta aside and made a special message for Ben. This is what hockey’s about!

Matthew Tkachuk has a special message for the Oilers number one fan, Ben. ❤️