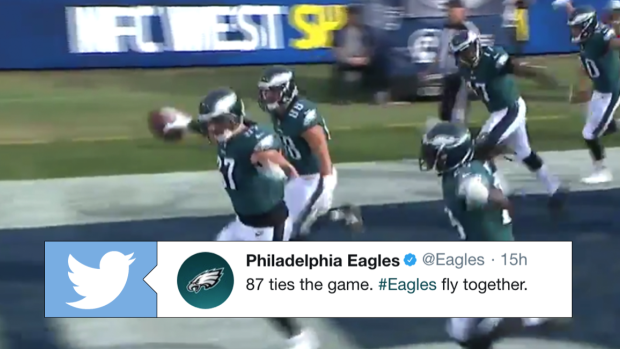 When it comes to touchdown celebrations, there are few teams better at them than the Philadelphia Eagles.  The Eagles have scored a ton of touchdowns this season and they always find a creative way to celebrate their scores.

In Ertz's defense, Alshon was crowding the plate. #FlyEaglesFly pic.twitter.com/ifrTMJxe8W

The thing we enjoy most about the Eagles' TD celebrations is that everyone gets involved in them and on Sunday against the Rams, that fact held true after their first score of the game.

Apparently Ducks and Eagles fly together, and being the massive Mighty Ducks fans that we are, we think that celebration might be the best of the season.

Don't just take our word for it, though.  Fans across the football world seemed to enjoy the celebration as much as we did.

Eagles pull out the Flying V!! Love it!!! pic.twitter.com/qxVr4vULly

Our Eagles did the Flying V. They stick together #TrustTheProcess #FlyEagelsFly

Flying V! Wentz is a far better captain than Charlie Conway. Although no Eagles matches the raw talent of Adam Banks

Did the @Eagles just do the flying V after they scored?