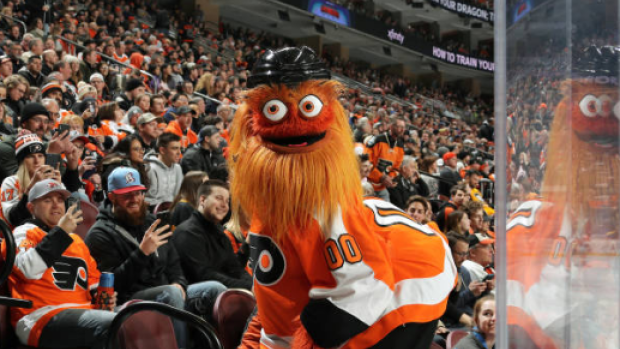 Most arenas in professional sports nowadays are equipped with all the necessities for teams to optimize performance.

That can be a full-on kitchen with a chef on hand at all times, weight rooms and rehabilitation centres, hot tubs and Cryogenic chambers, massage tables and pretty much everything else in between.

What you won't find in any team arena or practice facility is a "Rage Room."

The Philadelphia Flyers are installing a rage room inside the Wells Fargo Center. If you're unfamiliar with the concept, it's essentially a room that allows people to smash various items like plates, tables and walls with weapons such as sledgehammers.

TSN's Frank Seravalli has more on the details below.

True story - and maybe the most Philly thing ever. #Flyers have added a "Rage Room" to @WellsFargoCtr, where "participants wearing protective gear can smash, break, and unleash their rage upon everyday items like televisions and dishes using bats, sledgehammers, and more."

The #Flyers say some of the items in the "Rage Room" will feature the logo of the opposing team.

If Philly fans needed any extra motivation to hate the opposition, logos of the opposing teams will even be featured.

From the team's official release:

"The concept is definitely one-of-a-kind and non-traditional,” Valerie Camillo, Flyers and Wells Fargo Center president of business operations, said in the release. “We ran the concept by some of our fans who told us they thought this would be a fresh way to have some harmless fun. I had never heard of a rage room before the design team pitched the idea. Now, I can’t wait to get in there and take a few whacks."

The rage room-style space allows fans and guests a stress-relieving outlet amid all of the game action. Through scheduled sessions that can be reserved in advance, participants wearing protective gear can smash, break, and unleash their rage upon everyday items like televisions and dishes using bats, sledgehammers, and more. Some of the items that can be disassembled might even bear the logo of an opposing team.

Why can we just picture Gritty sleeping in the rage room ready to smash plates at any given time? Are players allowed to partake? What if they want to let off some steam after a rough game and need to go shatter some glass or something? So many questions to ponder.

To give you a better idea of what they're calling the "Disassembly Room," Katie Nolan joined up with Gritty to show fans what the rage room is all about. The room will be open for the Flyers' home-opener against the Devils on Wednesday.

Now you know where to send an angry Flyers fan the next time you see one.

Fans asked to reserve a time slot for an individual price of $35, or $70 for two people. Considering that Flyers fans are some of the most hostile in hockey, it’s probably wise to book a spot well in advance.