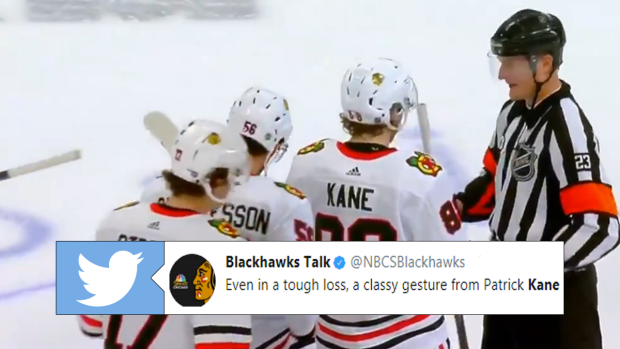 Brad Watson has been a staple of NHL officiating crews for a long time. Originally hired by the league in 1993, Watson has been taking the ice for longer than some players in the NHL have been alive, debuting as an NHL ref for the first time on March 7th, 1996. To put it into perspective, Tampa Bay Lightning emerging star Brayden Point was born six days after that debut.

In total, he has officiated 1,393 regular season games and 214 playoff games, including eight Stanley Cup Final games. That’s a total that commands respect, and with his regular season career coming to an end on Saturday the two combatants gathered to pay their respects to the veteran official individually.

Brad Watson officiated his last regular season game on Saturday and both teams showed their respect. Patrick Kane even gave away his stick to the 1,393 game veteran official 👏 . (🎥: NBC Sports Chicago)

Classy move from both the Chicago Blackhawks and the Colorado Avalanche. Despite the tough loss, the ‘Hawks made sure to pay their respects to something bigger.