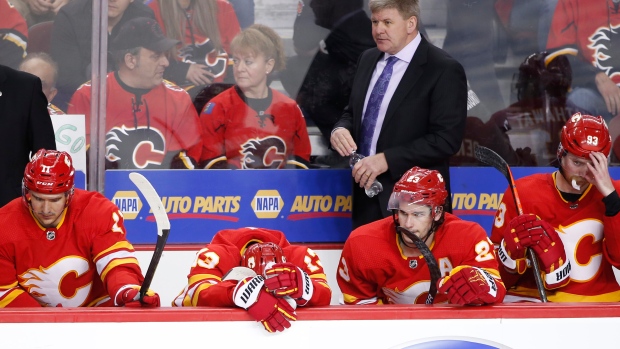 As if it wasn’t shocking enough that the Tampa Bay Lightning are out of the playoffs, they’ll now be joined by the NHL’s other conference champion. After winning Game 1, the West-winning Calgary Flames have lost four straight to the Colorado Avalanche, who will be moving on to the next round.

That marks a NHL first: The first time that the best teams in each conference has been eliminated in the first round.

Here’s what the hockey world was saying.

The #Avalanches have successfully put out the #Flames 😳 @bardown

Congratulations to the @Avalanche. All the best the rest of the way and we'll see you in 2019-20. pic.twitter.com/n0USRNMPDG

I hope the management team doesn’t overreact to a tough loss. Stick with the same group with minor tweaks and see what happens next season. What a great season it was. #Flames

If the Flames lose to Colorado tonight, Calgary only twice would have gotten out of the first round in their last 14 playoff appearances since winning the Cup in ‘89 (Cup Finals in ‘04 and 2nd round in ‘15). pic.twitter.com/0GXCaRlD7W

Lightning and Flames fans: "Man I can't wait for the 04 Cup Final rematch"

The Blue Jackets and Avalanche: pic.twitter.com/X9PKK1S3IU

Calgary Flames and Tampa Bay Lightning after getting eliminated in the first round pic.twitter.com/4hDa3zsMkA

You: "The Flames will have more playoff wins than the Lightning!"

Me: "Wow, they must be Cup champions!"

The moment you realize your season is over. #COLvsCGY pic.twitter.com/C2YzalxY3v

This is the closest the Flames will get to the cup this year #fLames pic.twitter.com/rGp9AOWd6B

Flames fans trashed the Oilers all season. Bragged non stop about how dominant their team is and how brutal Edmonton was. Yes the Oilers weren’t good, but this is our time to say....

You blew it. Another garbage playoff performance. Enjoy your failure. You deserve it. pic.twitter.com/m3qIUOOUlR

I never want to hear a Gaudreau comparison to MacKinnon ever again. There is no comparison.

Gaudreau is FINE. Ppl talking about him not being a playoff guy is stupidity

By the way his PPG in playoffs is same as McDavids, so is 97 not a playoff guy too 🤷🏻‍♂️

Johnny Gaudreau when someone looks at him the wrong way #Flames pic.twitter.com/lwkoHsOpef

Is Calgary the kinda town that is going to run Gaudreau out of the city after this.

the flames showing up to an elimination game pic.twitter.com/08tVoVjNBJ