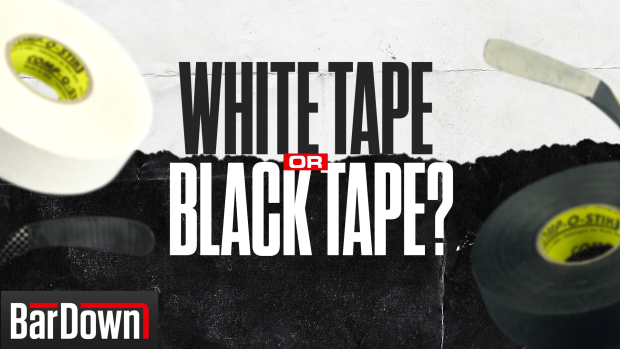 There are some debates that seem to just never die; Pineapples on pizza vs. not, MJ vs. LeBron, doors vs. wheels…

Hockey’s equivalent to the never-settled debate may revolve around something entirely different than players, teams, or skills. It revolves around the colour of tape on your stick.

While we’ve seen hockey players get wild with camo, flame, or variously coloured tapes, the classic two types of tape are simple: white and black. The divide in opinions is nearly split down the middle.

Black tape users often use the argument that black tape helps to hide the black puck better. White tape users believe their stick blends into the ice more, and that it just looks better. To further dive into the age-old debate, Corwin decided to find hard data amongst the nearly 1,000 NHLers that have played a game this season.

Of 991 NHLers that have played a game in the NHL this year, the split is pretty even. Black tape gets the slight edge in frequency of use, with 56% of current NHLers choosing black tape (including 66% of defencemen!).

Well, there you have it. Likely the most in-depth analysis of this debate that you’ll ever see. We may not have solved anything here, but hey… at least it was fun?