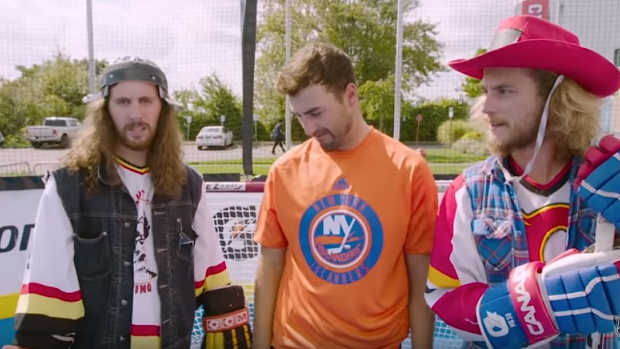 The On The Bench crew produced one of their most hilarious segments yet last week when they did an skit featuring the legendary Hanson Brothers.

The boys got a little help from some legends. The hansons helped the boys get you preppied for the big game when you know your shreddin finger blankets. #onthebench #otb #hockey #thehansons #fundies #eppie #tilly #fighting #nhl #200x85 @200x85

Olly Postanin and Jacob Ardown have been teaching several NHLers like Connor McDavid,  Chris Tanev, Josh Ho-Sang, and Wayne Simmonds all the ins and outs of hockey known as the ‘rules of the game.’

Most of their segments include various different ways for the players to improve their game in different regards, but their latest episode with New York Islanders winger Jordan Eberle touches on a new subject that most of us can relate to: gaining the respect of your new teammates.

Adjusting to a new team with new faces and nicknames in a big city like New York can be difficult. Whether its picking up pucks at the end of practice or filling up water bottles

the boys certainly helped Eberle in his adjustment.

Eberle was traded in the offseason by the Edmonton Oilers in exchange for Ryan Strome. The trade raised some eyebrows around the league, and so far, Eberle has outscored Strome by eight points.

This is Edmonton's top-six in an alternate universe where Pete Chiarelli makes literally zero moves as GM.

Olly and Jacob have certainly gained a ton of traction in the last few months by working with the NHL and its stars, and this one is definitely one of the more amusing ones we’ve seen to date.