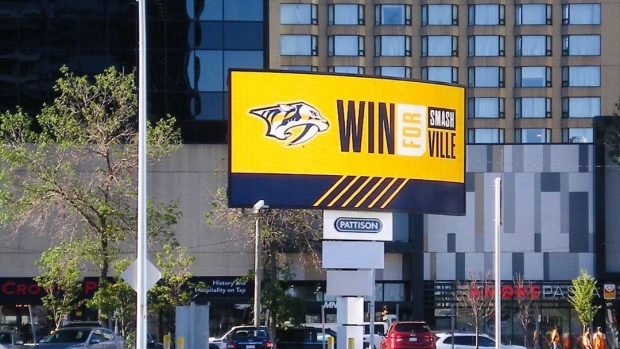 What happens when the Nashville Predators, along with half of the rest of the league, is calling Edmonton their home for the remainder of the season? Well, it looks like billboards just became prime real estate.

Though exhibitions games have only just begun, the Predators have already bought a billboard in Edmonton to support their team. We’re sure “Win for Smashville” will be an odd sign for Edmonton locals to pass by on a daily basis — are there any Preds fans in Edmonton?

With the entire league congregating in either Toronto or Edmonton, we’ve seen some unusual measures taken to support teams while they’re away from home, and investing in billboards around the city is certainly a good idea.

Over in the NHL’s other bubble site, the massive Gritty billboard watching over things in Toronto definitely makes a strong statement as well.

Gritty made the trip to Toronto 😂 . (📷: Philadelphia Flyers/Steve Dormer)