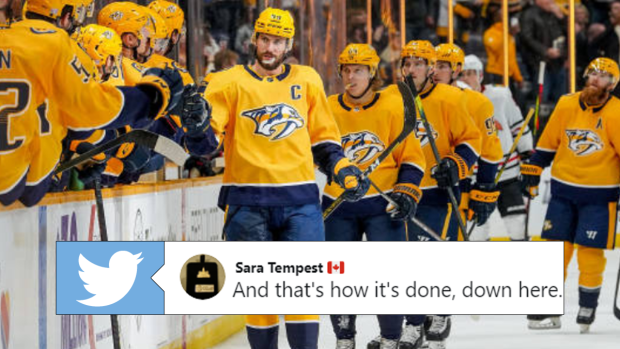 It can be hard for expansion teams to find their fan base at times, and it often takes a while for hype to grow around a city’s newest professional sports franchise. We’re not all the Vegas Golden Knights, okay?!

For the Nashville Predators, it’s safe to say that their fan base has FULLY arrived, along with the town’s new identity: Smashville.

Hype began to grow in a big way when the Predators qualified for the 2017 Stanley Cup Playoffs as the 8th seed, and promptly swept the 1st seed Chicago Blackhawks. It was the first time an 8th seed had swept a 1st seed in a best of seven series in ANY major North American sport… strangely it happened again with Columbus and Tampa Bay last year, but we digress.

The 2017 Preds went all the way to the Stanley Cup Final where they finally bowed out at the hands of the champion Pittsburgh Penguins, but a love for hockey had been instilled in the city. Since then, the Preds have further crafted their identity by doing things a little differently. From installing “Smashcars” outside Bridgestone Arena for playoff series, to lighting up the building with phone lights and “Let It Be” chants for video reviews against the Preds, Nashville has become a very, VERY fun place to be for a hockey fan.

It’s no surprise that their “Christmas tree” isn’t exactly orthodox, in fact it’s not even really a tree. It’s just sort’ve shaped the same way.

The @JackDaniels_US Barrel Tree has arrived! 🎄

Join us at the SoBro entrance tomorrow night at 5pm as we light it 🌟 The first 150 people there will receive a custom ornament!#Preds | #WPGvsNSH pic.twitter.com/q5DsVbgYQl

A Christmas tree made out of Jack Daniels whiskey barrels is extremely Nashville. Not only has the team become known for its party-like atmosphere (just ask Taylor Lewan and the Tennesee Titans’ offensive line), but the famous whiskey is commonly known as “Tennessee Whiskey” for its unique flavor and bite. In fact, all Jack Daniel whiskey is distilled within the bounds of the state, particularly in Lynchburg.

What else would you expect?

And that's how it's done, down here.