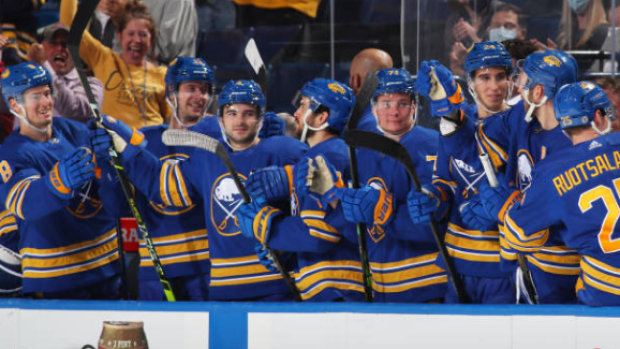 The Buffalo Sabres – yes, the same Sabres that suffered 18 straight defeats just one season ago – are off to a hot start in 2021-22. Not only have they hopped out to a 3-0 start, but they’ve looked good doing it. Playing against the Montreal Canadiens, the Arizona Coyotes, and the Vancouver Canucks, the Sabres have outscored opponents 12-4 through three games.

Sure, their competition may not be the steepest quite yet with opponent records totaling 1-8-2 thus far, but it’s still encouraging for a team that was seen as nearly an auto-defeat last season. All of this is happening without former #2 overall draft pick Jack Eichel, too!

So what do odds makers think of this red hot start from Buffalo?! Well, they got a little love I guess?

after starting 3-0 the buffalo sabres playoff odds have moved up from 0.4 percent to 1.1 percent

After the hot start, the Sabres odds increased to a FAT 1.1%!!

The fact they can look so good through three games, win all of them, and still not really move the line is an indication of how odds makers feel about the roster in general. Hey, maybe they’ll play better with a big ol’ chip on their shoulder?

On the other hand…

What a strange start to the year it’s been so far.