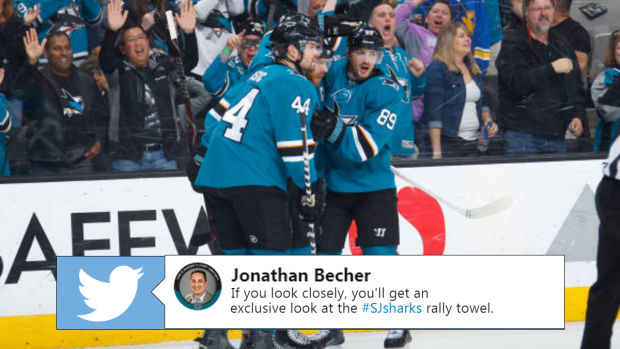 Starting on Wednesday night, the Stanley Cup playoffs will officially start checking games off. That means teams are gearing up both on the ice and off the ice for the most intense (and the most fun to watch) hockey of the year.

The Sharks and the Ducks have helped to make California a hockey state, and their rivalry should not be underestimated. On Tuesday, a sneak peak of the Sharks’ rally towels emerged.

Love this #PlayoffMode neon sign going up in local watering holes. Send photos of them "in the wild." If you look closely, you'll get an exclusive look at the #SJsharks rally towel. #SharksForLife #SharksTerritory pic.twitter.com/MKUVIgq9oz

The Duck Hunt-themed towels are sure to be a hit, but let’s be honest, that neon sign is really what puts the photo over the top.

Omg that towel is dope pic.twitter.com/gg2TWJMpfv

if you then you don't
don't love deserve
me at my me at my pic.twitter.com/NPcy8Y8R8w