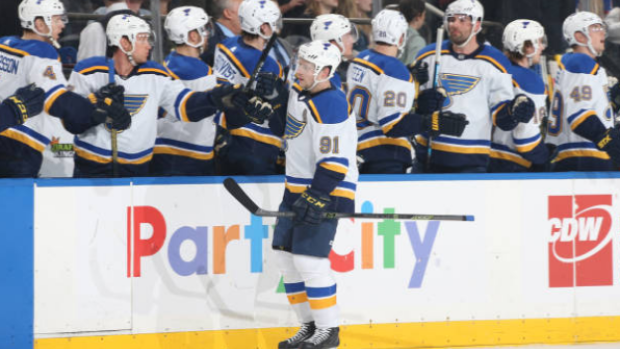 Flashback to the start of 2019 and the St. Louis Blues were dead last in the NHL standings.

On the morning of January 3rd, the Blues had an NHL worst 34 points and were on pace to be the biggest disappointment of the 2018/19 campaign.

Fast forward to the end of March, and St. Louis now has officially punched their ticket to the 2019 Stanley Cup Playoffs, becoming the ninth team to do so after Tampa, Washington, Boston, Winnipeg, Nashville, Calgary, San Jose and Vegas.

Although they lost on 4-2 on Friday to the New York Rangers, the Arizona Coyotes falling 3-2 in a shootout to the Colorado Avalanche was all they needed to clinch.

The team rallied and went 26-9-4 from the start up 2019 leading up to the present day and now have the top spot in the Central Division in their sights thanks in part to an eleven game winning streak.

The last team to qualify for the post-season after being last in the league through 20 games? The 1996-97 Ottawa Senators.

The 2018-19 St. Louis Blues are only the seventh team in the Expansion Era (since 1967-68) to qualify for the Stanley Cup Playoffs after being last in the entire league at any point after their 20th game of the season.

The biggest facotr in the turnaround started in goal when Jordan Binnington was summoned from the minors and saved their season. Since being recalled on January 3rd, the 25-year-old has a sparkling record of 21-5-1 while sporting a 1.85 goals-against average and .928 save percentage.

Craig Berube was brought in to replace Mike Yeo, and although he struggled to spark much of change earlier, Berube's name is now being floated into the Jack Adams discussion for helping turn the team around.

Factor in Vladimir Tarasenko doing what he does best and Ryan O'Reilly leading the team with 72 points (27 goals, 45 assists) in 77 games, the Blues seemed poised to do some serious damage in the post-season and could be a scary opponent for the Nashville, who they're currently matched up to play against in the opening round.