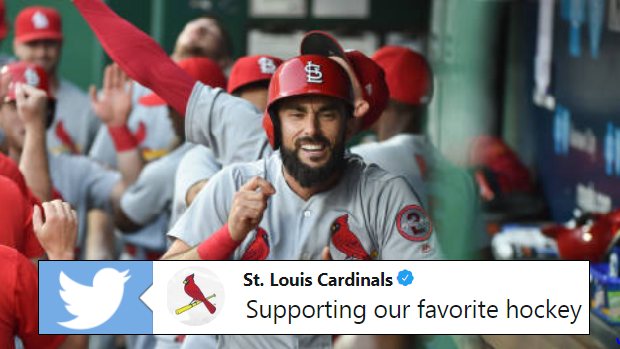 There’s nothing like seeing a bunch of young guns get the good old’ rookie treatment.

The St. Louis Cardinals hit the road for an afternoon tilt with the Washington Nationals and decided to have some fun with the new guys on the way. NL MVP candidate Matt Carpenter shared a hilarious photo on Twitter of his teammates rocking some wicked Blues jerseys on the plane, the only kicker was that each one of them had to wear full equipment to go along with it…

Okay, so we’ve seen plenty of worse rookie initiation antics, so this one is obviously on the lighter side. But jeez, can you imagine having to rock that on a plane for an extended period of time? And to make matters worse, do it in Missouri’s boiling hot summer? Doesn’t sound like too much fun (but kind of looks like it).

Check this year’s Rookie Dress Up Day! 🏒 (Shoutout to the @stlouisblues for sharing the equipment)

The Cards’ ‘staying loose’ tactic has been working out pretty nicely in their favour. The team is 18-6 over their last 24 and currently hold the second Wild-Card spot in the NL, but they’re not the only ones to have pulled off a pretty hilarious prank recently. Los Angeles Rams quarterback Jared Goff went undercover at a practice in a hilarious skit that completely fooled his peers.

Gotta love it when these kind of things happen!