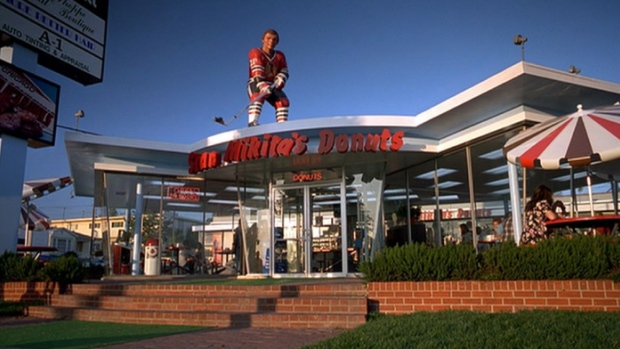 It's time to get the squad together and hop into an AMC Pacer, because the Stan Mikita  Donuts diner from Wayne's World is opening up in real-life.

As part of the NHL All-Star Game festivities in Los Angeles this weekend, hockey fans will be able to land themselves some excellent munchables with the limited time opening of the Stan Mikita All-Star Cafe. Inspired by the Tim Hortons franchise in Canada, comedian Mike Myers decided to create his very own hockey player endorsed coffee chain in the 1992 classic film, Wayne's World.

Thanks to Sports Illustrated and Entertainment Weekly the fictional coffee chain will be opening its doors for real on Friday, serving free coffee and free donuts. On top of that, the cafe will also welcome a number of NHL players throughout the weekend.

In anticipation of the opening of the Stan Mikita Cafe, Sports Illustrated caught up with Mike Myers, asking the comedian how the Blackhawks legend's fictional donut chain came to be.

A lot of Wayne’s World is a transposing of my growing up in the suburbs of Toronto. One of the things that we would do is go to Tim Horton’s donuts out in Scarborough. It’s very flat and suburban. We needed a location for Wayne and Garth to hang out. We needed to [put the] people [in] the world, because it was in the basement on the TV show [Saturday Night Live]. We needed to have it be Wayne’s world, outside of the basement, so we thought Tim Horton’s, [but] because it was Chicago, [it] could be Stan Mikita.

As a kid, I remember there were certain teams and players that we liked to call defoliants, i.e., they would destroy the Leafs. Stan Mikita was one of those guys who seemed to always score a clutch goal against us. And he was a fantastic centerman. He’d often get a Gordie Howe hat trick—a goal, an assist and a fight. We just wished he played for the Leafs, basically. He said he’d allow us to use [his name and likeness] for Stan Mikita’s Donuts, and that he’d come down and be part of the film. I was humbled in his presence. I didn’t know what to say, because I get very star-struck around hockey players. It was just a fantastic experience.

To read more on Mike Myers affinity for Stan Mikita and childhood stories from growing up as a fan of the Maple Leafs, check out the full Sports Illustrated piece. To see Mike Myers win in a dance-off against Jimmy Fallon (yes, really), click here!