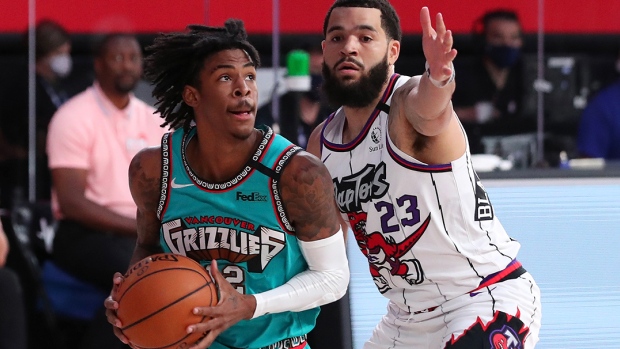 The Naismith Cup is back!

It might not be the same as having a team back in Vancouver, but with the Toronto Raptors and Memphis Grizzlies adopting their original jersey from the 1990s era for their game on Sunday, it was certainly the closest we’ll get to watching an all-Canadian NBA game again for the time being.

And come on: By any measure, these are two of the most beloved jerseys in all of NBA history. You can’t tell us the game wasn’t friendly on the eyes!

For the first time in a long time: Toronto versus Vancouver 😍 which team is rocking the better jersey? . (📸: Getty Images)

With the NBA's social justice jerseys, that meant these throwbacks were incarnated with messages such as 'Black Lives Matter' or ‘Equality’ across the back.

This was actually the first game between the Raptors and the Grizzlies since the Marc Gasol-Jonas Valanciunas trade last season, and the Grizzlies also have two talented young Canadians on their roster in Dillon Brooks and Brandon Clarke.

It’s only unfortunate that this game is being played in the NBA’s Orlando bubble instead of either team’s throwback courts from the 1990s — as was the original plan — but hey, we’ll always be happy to see a Toronto-Vancouver game in the NBA.