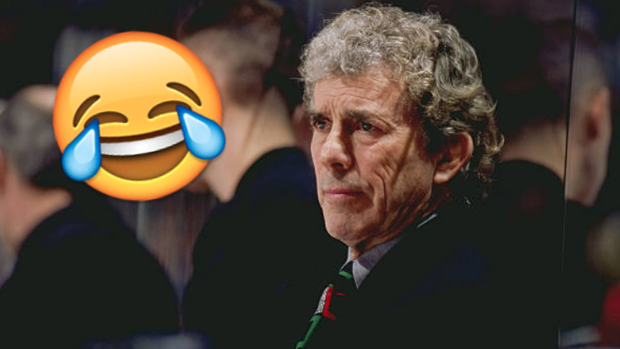 For the most part, the NHL is pretty sound in its rulebook. Of course there are some murky areas such as *cough* goaltender interference, but for the most part fans and players are generally pretty satisfied with how the game works. In order to get to the point we are currently at, there had to be some revisions made. Especially after Roger Neilson came into the league and started singlehandedly disrupting the way the league worked with his pesky loopholes.

In a video produced by SB Nation, two hosts – Ryan and Seth – break down how Neilson was able to change the game of hockey. The Hall of Fame coach had a knack for the odd, and he’s solidified his way into hockey lore even further with the resulting rulebook revisions directly following his actions.

1.  Intentionally putting too many men on the ice.

This was basically a way for Neilson to prevent the other team from having an opportunity to score. When the game clock was ticking down and the other team was trying their best to score a goal, they would have to deal with constant interruptions from the ref sending yet another Neilson-coached player to the box.

2. Putting a defender in for penalty shots instead of a goaltender.

While it was stated that there could only be one player on the ice trying to prevent the attacking player from scoring, it did not explicitly say it had to be a goaltender. This allowed Neilson to pull another one of his clever stunts, sending a defenceman out to skate at the attackers (there was also no rule about staying in the net). As most hockey players would agree, it is awfully hard to get around a defender in a 1 on 1 situation, and this allowed Neilson to take advantage once again.

3. Goaltender leaving his stick in the net after getting pulled.

Plain and simple, nothing said that a goaltender was not allowed to leave his stick lying across the crease after getting pulled. The stunt would obviously interfere with players trying to score, especially if it was one of those full ice dumps trying to slip it in. Once again, a rule was then put in place.