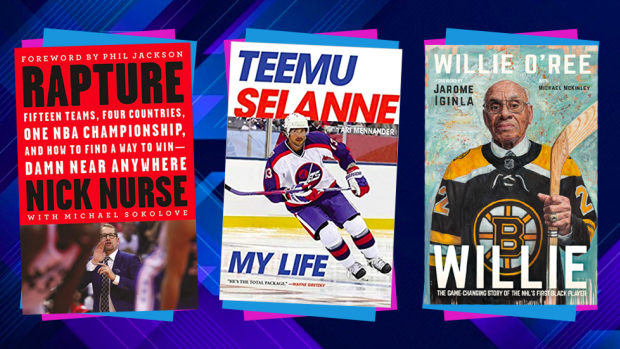 Because of the pandemic, you might’ve had the chance to get some more reading in this year. (Or, maybe you never got around to reading those books you ordered in March after all. Honestly, we don’t judge.)

With Christmas right around the corner, though, books are of course a great gift for the sports fan in your life, and especially since most of us are just sitting at home with nothing to do anyway.

Here’s hoping the NHL returns to our lives some time soon, but until then, here are some of the books we read this year that would look great under a close friend’s Christmas tree.

Of course we had to put Teemu on this list. (YOUR Winnipeg Jets...) This biography is a great look into Teemu's life, from Helsinki and through the NHL with a Stanley Cup championship and four Olympic medals to his name.

In fact, it’s probably safe to say that he’s the most decorated BarDown quiz contestant of all-time, although we have to note that his resume is still missing a quiz win. Feel free to come back any time, Teemu!

Rapture: Fifteen Teams, Four Countries, One NBA Championship, and How to Find a Way to Win -- Damn Near Anywhere, by Nick Nurse and Michael Sokolove

Everyone’s favourite honorary member of the Arkells also has one of the most roundabout paths to an NBA championship that we’ve seen. This book takes us through Nick Nurse’s journey across all levels and locales of basketball, and ultimately the processes that led to an NBA-winning approach.

You know we had to show Duthie’s new book some love! For the real hockey heads, this is the sort of deep dive into the culture’s greatest stories that really does the sport justice.

Yes, I know you want punch me in the mouth with my book by now. But first, a contest!!!#Beauties @HarperCollinsCa pic.twitter.com/gSbiMZo0IF

The first Everyday Hockey Heroes from Bob McKenzie and Jim Lang in 2018 was such a hit that the pair returned with a follow-up earlier this year. The chapters focusing on those individuals who have pushed the game to be more inclusive, such as Karina Potvin — the youth hockey coach that welcomed young Syrians to Canada through the game of hockey — are especially strong.

Doc: The Life of Roy Halladay, by Todd Zolecki

This book remembers Doc Halladay through extensive reporting with those in Halladay's life, as well as others who were able to brush up against his talent on the pitch over his 16 years in the MLB. It’s a truly powerful reflection on his career and life. RIP, Doc.

Willie O'Ree: The Story of the First Black Player in the NHL, by Nicole Mortillaro and Willie O'Ree

This year has seen a focus on inclusion in hockey and making sure that the game is for everyone like never before, from the formation of the Hockey Diversity Alliance to the context of the Black Lives Matter movement in the broader fabric of our society.

This biography recounts the challenges that Willie O’Ree faced in becoming the first Black player to play in the NHL back in 1958, and in doing so, crystallizes how many of those challenges have been carried forward to this day. Make sure to check out our Q&A with O’Ree as well.

The Revolt of the Black Athlete, by Harry Edwards

Again, an important book to read that intersects with the powerful protest movements we’ve seen in sports this year. Dr. Harry Edwards is an American sociologist who was involved with the Black Power Salute protest from Tommie Smith and John Carlos at the 1968 Summer Olympics in Mexico City. This book retraces the historical context of that event, and an afterword in the 50th anniversary edition of the book brings it forward to touch on modern-day movements such as Black Lives Matter and athletes including LeBron James.

Finding Murph: How Joe Murphy Went From Winning a Championship to Living Homeless, by Rick Westhead

The story of Joe Murphy, the No. 1 overall pick in 1986 and a Stanley Cup champion in 1990, is a difficult one that leads Murphy to homelessness in 2018. Rick Westhead examines the path and the causes that results in such a tragic thing happening to a former NHL player.

Shoe Dog: A Memoir by the Creator of Nike, by Phil Knight

How did Nike become Nike? This autobiography from co-founder Phil Knight offers an inside look at how he made his start in the industry, and what it takes to build a brand that is about so much more than just shoes and gear.