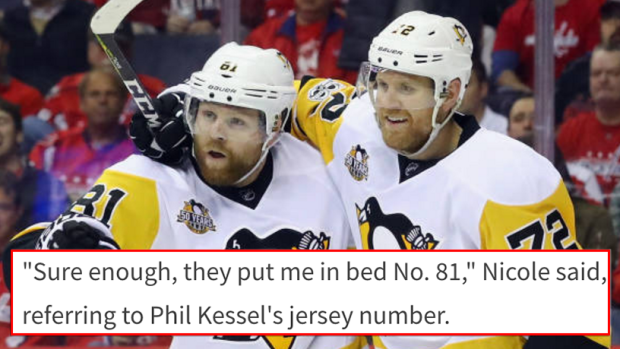 As much as Penguins fans love Sidney Crosby, Evgeni Malkin and Marc-Andre Fleury, we imagine they love Phil Kessel just as much.

Although he's only in his second season in the Steel City, Kessel has become a fan favourite because of his ability on the ice and his fun personality off of it.

In order to honour Kessel, some fans have gone as far as getting a tattoo of him.

This tattoo of a Stanley Cup Champion exists. (Via @aaroncheat)

There's something that tops that epic tattoo, though.

On Mother's Day, Penguins fans Nicole and Adam Hillman had a son and they named him after Phil.

As per WTAE, Kessel Ryan Hillman was born at Butler Memorial Hospital.

Kessel's dad played 'Let's Go Pens' in the delivery room while he was born, and his mom, Nicole, was placed in bed number 81.  The baby was also born just two minutes before Kessel scored the game winner a day later to even the series.

The #Penguins even the series at one game apiece after beating the #Senators 1-0 in Game 2.

Well, this might be our favourite story of the playoffs so far.  We wish nothing but the best to baby Kessel and his parents, and we hope one day Phil and baby Kessel meet and take a picture together with the Cup.