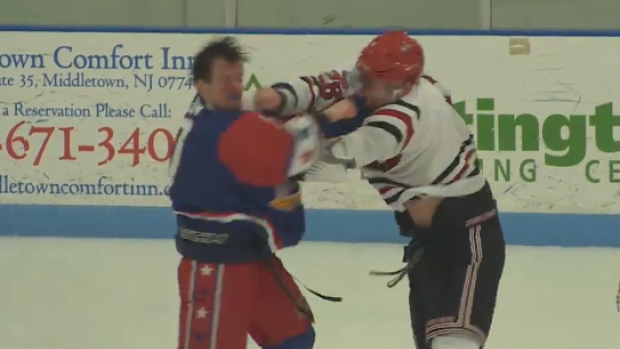 Hockey fights are reaching a point where they're almost obsolete in the NHL with more speed and skill materializing every season.

According to HockeyFights.com, there’s been 224 tilts this season, or 0.23 fights per game, down from the 0.30 benchmark in 2016/17 where two pairs of gloves were dropped 372 times. Only 18.87 percent of games this season have featured fights.

While fighting has almost vanished from the NHL, there are still leagues that haven’t seen as much of decline, relatively speaking. In leagues such as the ECHL, fights are much more common than the NHL largely in part because traditional enforcers, generally speaking, simply don’t have the talent to keep anymore and force to play in leagues that still overvalue toughness. Via DropYourGloves.com, the ECHL features 0.66 fights per game, while the AHL comes in at 0.43.

Fights in junior hockey are even less common largely in part because rules have been implemented to mitigate the chances of a scrap. In the OHL, if a player fights three times in a season, it will automatically result in a two-game suspension.

The North American Hockey League is a tier-two junior league (equivalent to Junior A in Canada) that’s a step below the USHL, but slightly stronger than Junior A Canadian leagues such as the BCHL and OJHL.

Over the week, the New Jersey Titans took on the Philadelphia Rebels in a little NAHL action. The Rebels shutout the Titans 4-0, but one of the big takeaways from the game was a scrap between the two clubs. Eric Olson of the Eagles and Cam Kuhl of the Titans decided to drop the mitts in what was one of the most intense fights we’ve stumbled across in a long time.

32 seconds of flying fisticuff hockey with some serious bombs landed. Kuhl took a shot early, but managed to regain his footing and popped right back up. That doesn't seem like that long of a time, but when you’re throwing multiple punches a second, that’ll definitely tire you out.

Now that was a tilly. We'll chalk that one up as a draw.