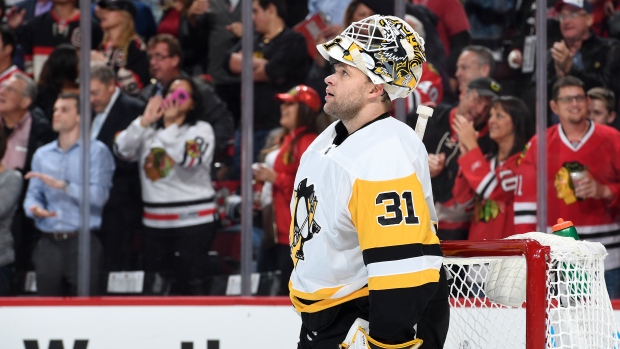 Last night, the Pittsburgh Penguins were ready to try and get their season back on the right track after losing one night earlier, but they fell a little flat.

Much to the delight of the anti-Penguins hockey fans, they got thrashed by the Blackhawks last night to the tune of a 10-1 loss. There were several shocking stats and other information to come from this game, including the face that the Penguins have now given up more goals in two games this season than they did in the entire Stanley Cup Final, but what really sums up last night is this video.

Newcomer Antti Niemi was ready to start his first game of the season last night, but it didn’t start like he had hoped.

shortly before giving up 4 goals pic.twitter.com/Rg52zHouSO

As you can see in the caption there, Niemi’s night didn’t go according to plan afterword either.  Niemi ended up giving up four goals, but what you don’t see is that was in less than 10 minutes on just 13 shots.

Still, Pittsburgh will likely bounce back from this, as they have from many losses in the past two seasons that didn’t deter them from winning the Stanley Cup. Still, Sidney Crosby admits, it is embarrassing.