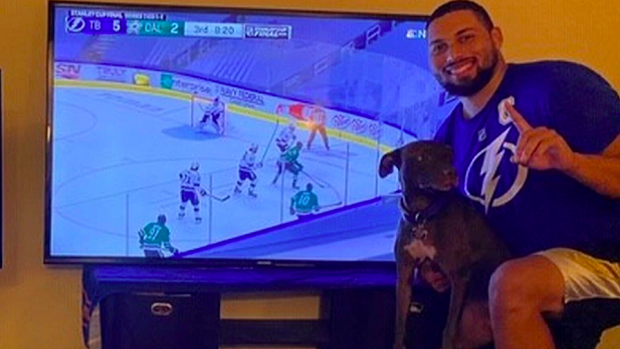 Last night, a group of three friends in Tampa were so fired up about the return of Steven Stamkos and the Lightning’s convincing win that their shrieks of joy and cheering prompted their neighbours to call the cops.

If you grew up surrounded by hockey fans and hockey rinks, you’ve probably heard someone yell “shoot!” at the ice, or at their TV. It’s about zero percent helpful to players during a game, but somehow a little bit soothing for hockey fans wishing to channel their inner NHLer. Of course, it’s not all that common outside of hockey arenas.

Lightning superfan Devon Garnett told Joey Knight of the Tampa Bay Times that  he and his two friends were cheering on their Tampa Bay Lighting when the cops showed up at their door, thinking there was guns at the house because neighbours heard reports of people shouting to “shoot!”. “So they came to the door and thought there were guns in the house,” explained Garnett, 26. “We’re like, ‘Nope, we’re just screaming for Steven Stamkos.’”

“So they came to the door and thought there were guns in the house,” said Garnett, 26. “We’re like, ‘Nope, we’re just screaming for Steven Stamkos.’”https://t.co/QDsPTznLBU

Honestly, fair enough reason. How could you not when he came out that strong out of the gate, with his hair flowing in the wind?

“(The police) completely understood and just laughed it off, but they thought it was serious because I was screaming ‘Shoot!’ as in ‘Shoot the puck.’”

The police apparently laughed about the misunderstanding, and we’re happy this situation had a good ending.

We’re sure these fans would be even happier if Stamkos is in the lineup tomorrow night, but we’ll have to wait and see!