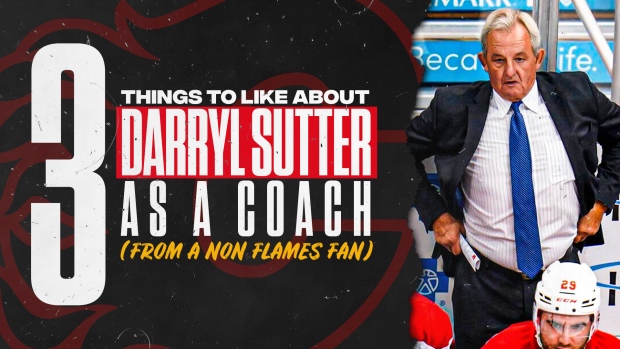 The Calgary Flames live to fight another day!

With a 3-2 Game Seven win over the Dallas Stars on Sunday, the Flames have advanced to the second round of playoffs to face the Edmonton Oilers! This is their first time making it out of the first round since 2015 and just the second time since 2004.

There’s many reasons as to why this year is different, but one that stands out among others is their head coach, Darryl Sutter. While you may not particularly like the Flames, that doesn’t mean you can’t get behind their tough-loving coach. With the Flames, being one of the only two Canadian teams still competing in the playoffs, we figure it’s a good time to share some positivity before the Battle of Alberta begins.

Here are three nice things about Darryl Sutter that we like from a coaching perspective:

1. He's completely transformed the Flames in just one season

In March 2021, the Flames relieved Geoff Ward of his coaching duties and brought in their former coach, Darryl Sutter. It only took him one season to regain the trust from fans. The Flames went from being out of a playoff spot at the end of the 2020-2021 season to finishing first in the Pacific the next. He pulled out career high numbers from multiple of his star players (Gaudreau 115 points / Lindholm 42 goals / Tkachuk 104 points). We’re not sure what’s going on behind closed doors but whatever it is has to be working! With that said, we all know that Darryl has no problem being blunt to get the most out of his players.

Before the puck drops for Johnny Gaudreau’s 500th game let’s check in on how proud Darryl Sutter is of him#CofRed #Flames pic.twitter.com/SfI8BWs4az

Sutter coached the Flames from 2002 to 2006 - most importantly in 2004 when he led the team to the Stanley Cup Final against the Tampa Bay Lightning in 2004. While he was the Flames General Manager from 2003-2010, he took a break to win two Stanley Cups with the Los Angeles Kings in 2012 and 2014. Besides bringing Cup experience back to the Flames, Sutter is a Game Seven veteran. With 11 games played under his belt, no coach in the NHL has played or won more than he has. After Sunday night's win, his all-time record improved to 8-3. When it comes to Game 7’s, Sutter has been playing chess while the rest of the league has been playing checkers.

Interesting fact--On Sunday, Darryl Sutter will have coached the most Game 7s in NHL history [11], passing Mike Keenan, Mike Babcock, and Claude Julien who have all coached 10.

Sutter already has the most career Game 7 wins by an NHL head coach [7-3].#flames

3. He's the king at press conferences

Besides his incredible playoff experience, if there’s one other thing we know about Darryl, it’s  that he’s hilarious (and at times unpredictable) in his press conferences. You never really know what you’re going to get from him! As hockey fans, there’s nothing we respect more than some personality from players and coaches. Whether it’s ruthless or hilarious, you can always count on Darryl for giving us some gold.

Darryl Sutter ahead of Calgary’s Game 7.

When it comes to some heat in the playoffs, Darryl Sutter is down. pic.twitter.com/b5pos5Z9Uf