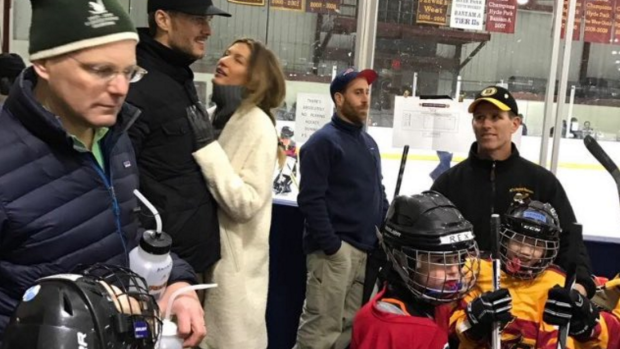 One of the great things about the sport of hockey is that it brings people together.

Think about it, when you were little, your parents probably came to every game, they helped tie your skates and carry your bag, and sometimes they probably called all of your relatives to come and support you for a big game.

Obviously when you get into your late teens and early twenties that changes as you can drive yourself to games and there is no way anyone helps you put on your equipment, but you do continue to play with friends and family and that keeps everyone together despite how busy life gets at times.

Saturday, Tom Brady proved he's perfected the art of being a hockey dad as he spent the day before the AFC Championship being the best hockey dad ever.

Brady's son plays for Brookline and of course he was cheering on and supporting his little one.

Aside from cheering on his child, he also carried his bag, which proves how great of a hockey dad he really is.

We're sure his kids will be returning the favour tomorrow as Brady battles Big Ben and the Steelers for a trip to the Super Bowl in Houston.