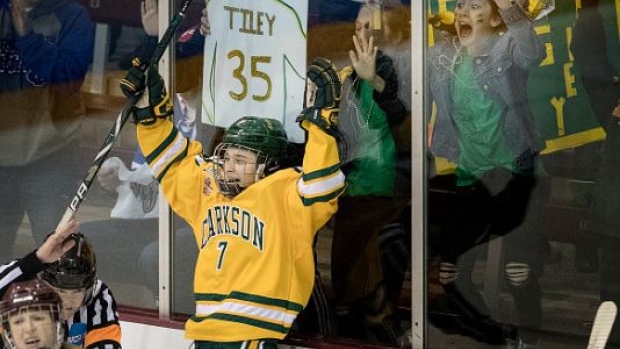 At only 14-years-old, Brooke D’Hondt has been making her name in the world of winter sports and is only poised for a successful future. Born in Calgary, Alberta, Brooke originally began skiing until trading her skiis for a board at five years old. Brooke loves competing in many snowboard events, especially half pipe. In 2020 she will be starting high school at the National Sports School in Calgary, which is a high-performance athletics school that assists athletes in their sport and their academic career. In her 2018/19 season, Brooke secured a win at the Burton Junior Jam at the US Open, placed 11th at the US Open Women’s Halfpipe, won gold in the Mammoth Rev tour stop and won the SportCheck Air Nation Senior and Junior National title. All together, this earned her the Overall Nor Am Cup for the season. Next year, keep an eye on Brooke at the US Open and X Games, as her name will definitely be up there with the likes of Laurie Blouin.

Everyone knows that Canada has had some incredible tennis stars emerge in the last couple years, and they’re not done yet. On Feb 28, Leylah Fernandez became the youngest finalist in the Mexican Open as she defeated Renata Zarazua 6-3, 6-3. On March 4th, she managed to win in a come-from-behind match over 2017 US Open champion Sloane Stephens at the Monterrey Open, and is now into her second WTA quarter-finals. The 17-year-old from Laval, Quebec shocked fans in early 2020 with her surprising run. Currently ranked 126th in the world, Fernandez won her first professional singles tennis title in July 2019 when she beat fellow Canadian Carson Branstine in the Gatineau National BankITF Challenger. On that same day, she also won her first professional doubles title with Rebecca Marino from Vancouver. Although Bianca Andreescu is out with an injury, with Leylah Fernandez, the future of women’s tennis in Canada is certainly in good hands.

The 18-year-old from Kingston Ontario has been making a name for herself since 2017, when she spent her summer playing for the provincial and national all-star teams for Canada Basketball. Standing at 6’3”, Aaliyah can’t be missed, and her skill on the court has been improving over the years. In september 2019, Edwards played with Team Canada in the FIBA Americup in San Juan and won 109-53 against Mexico. In that game, Edwards scored 10 of Team Canada’s points. Just a month later, she signed with the University of Connecticut Huskies women’s basketball team. UConn is known for being the most successful women’s basketball program in the United States, guaranteeing that Edwards’ skills will only improve in 2020. Edwards’ goal is to play for Canada and go to the Olympics, and UConn will help her reach that goal. Now, with the Canadian team qualified for the 2020 Tokyo Olympics, Edwards will have a chance to prove herself on the big stage.

The Ottawa native speed skater has been having the best year of her career. After finishing top three many times, she won silver at the ISU World Allround Speed Skating Championships. This made her the second Canadian woman to reach the podium, the first happening in 2012. She joined the junior national team at age 14, and at 17 she competed at the Canada Winter Games, winning gold in the 1500m and silver in the 1000m. Unfortunately, she dealt with five concussions in a three-year span, and then in 2010 she moved to Calgary to focus on long track. Then, in 201, she was diagnosed with mononucleosis and was put on the national development team for 2012-13. She finished that year as third in the World Cup standings for the mass start event. It’s great to see Blondin returning to the Olympic stage.

The 2020 Tokyo Olympics will feature Sport Climbing making its Olympic debut, which is a vertical wall climbing event that features three disciplines: Speed, Bouldering and Lead. As the official Olympic website puts it, “Speed climbing pits two climbers against each other, both climbing a route on a 15m wall. In Bouldering, athletes scale a number of fixed routes on a 4.5m wall in a specified time. In Lead, athletes attempt to climb as high as possible on a wall measuring over 15m in height within a specified time.” Alannah Yip, from North Vancouver, won the International Federation of Sport Climbing Pan American championships in early March in Los Angeles, earning her a spot at the upcoming 2020 Tokyo Olympics. She won her first national climbing championship at 12 and has won seven open national titles since then.

Sharon Fichman is a Canadian-Israeli tennis player who has been around since she played in Flushing Meadows in 2006. She has played in the US Open qualifying tournament each year from 2009-2012. In 2014, she hit her career-high rankings in singles at No.77 and in doubles at No.48. After taking a leave of absence from the court in 2016, she returned to the US Open doubles tournament with Bianca Andreescu in 2019. Now, Fichman is looking towards the 2020 Tokyo Olympics, and her future looks bright.

Another Canadian snowboarder, Hosking is only 18 years old and already on the path to success on the halfpipe. But she has also dealt with her fair share of injuries, as in 2015 she broke both of her wrists, leaving her unable to use her hands for six weeks. But she came back in 2016, winning both the junior and senior national slopestyle titles.  Born in Longueuil, Quebec, Hosking made her Olympic debut at the 2018 Pyeongchang Games, where she finished 19th in the Women’s Halfpipe event.

On March 3, the three finalists for the top individual award in NCAA Division 1 women's hockey were announced, and Quebec City native, Elizabeth Giguere was among the nominees. The university junior led the NCAA in goals with 36, and was second in points with 65 for an average of 1.81 points per game. With insane play making skills, it’s no surprise that Giguere was nominated. The Eastern College Athletic Conference honoured Giguere with the ECAC Rookie of the Year award. Her consistency in setting up goals has earned her a spot in the nominations for this year’s Patty Kazmaier Award, and the winner will be announced on March 21 during the women's Frozen Four championship.

Mikaela Tommy has been an Alpine Canada team member since 2013, and she already has many strong accomplishments in her short career. She won her first three career races, catching the eyes of her competitors. In 2018, she was ranked #1 in Giant Slalom for the Nor Am Cup, and #3 in Alpine Combined. Tommy is a very promising racer and hopefully we will be seeing her on the Olympic stage soon.

Another niche sport, Montreal hosted the first of three events in the FINA World Diving Series this weekend. At 28, Abel won two gold medals total, in women’s three metre springboard and women's three-metre synchro springboard. Although the diving champions China didn’t compete, Abel still impressed Canadian fans. Montreal was the first of three World Series events, and then next stop is Kazan, Russia from March 20th to 22nd. Abel and the other Canadian divers continue to work their way to the 2020 Tokyo Olympics.