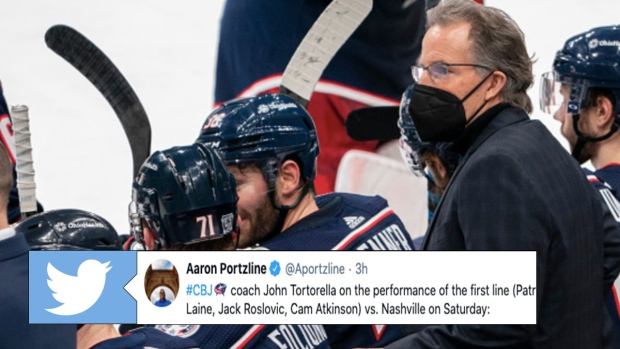 If you know John Tortorella  at all, you know he’s not one to mince words.

Actually, you know what? Maybe he is one to mince words. Like, mince them up into little pieces and get right to the point. He’s definitely not going to spare your feelings.

Torts usually takes one of two routes when it comes to talking to the media after games: he generally either refuses to say much at all, and sometimes walks right off the podium, or he gives us the best sound bite we could have ever dreamed of. No in between.

Tortorella has been a hot topic in hockey all year long. While most of the attention has been surrounding his benching of Pierre Luc Dubois, and then Partik Laine, Torts always knows how to make the news with postgame comments.

Saturday night was no different.

Following the Blue Jackets’ 4-2 loss at the hands of the Nashville Predators, Torts was asked about his top line of Patrik Laine, Jack Roslovic, and Cam Atkinson’s performance. The line combined for zero points and a single shot on net through the entire game, so Torts’ answer went exactly how you’d expect it to go.

Did you think Torts was gunna beat around the bush? Never.