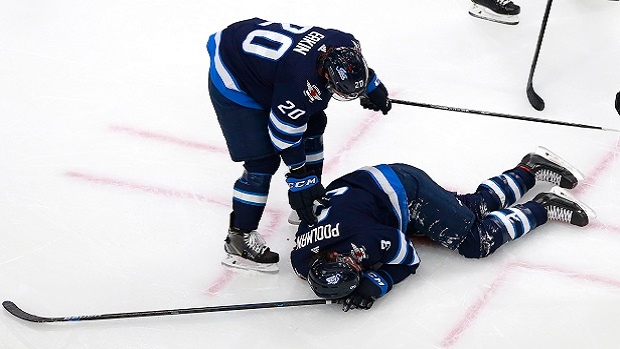 Hockey players have the reputation for putting their body on the line for their team, especially when it’s the playoffs, and Tucker Poolman did just that on Tuesday night.

In the second period of Game 3 between the Winnipeg Jets and the Calgary Flames, Poolman went to block a shot early in the second period and ended up taking the puck off the face. As a result, he was forced to leave the game to get stitched up.

However, by the time the start of the third period rolled around, Poolman was back on the bench with the rest of his teammates ready to go, only this time he was rocking a full cage.

Tucker Poolman blocked a shot with his face in the 2nd period and was back on the bench for the 3rd period. 😲💪 . (📷: Jeff Vinnick/Getty Images)

We would never encourage anyone to return to the game after taking a puck off the face, but if the team doctors cleared him to play then he must be good to go.

Tucker Poolman has changed from the full cage to full face shield.

It doesn’t get any tougher than that.