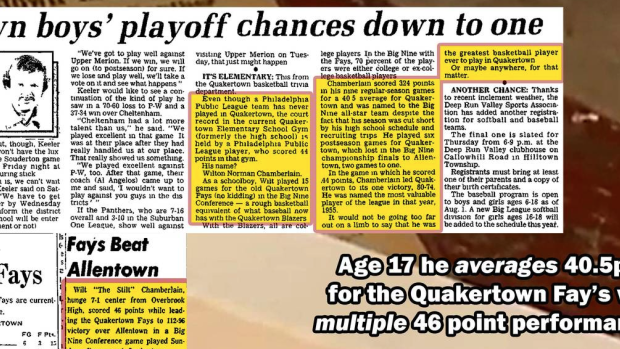 The Hall of Famer was a 13-time All-Star, a two-time champion and a four-time league MVP.  Even if you didn't watch Chamberlain play, you've seen him.

Chamberlain scored 100 points against the New York Knicks and nobody has come close to that record.

20-year-old #DevinBooker went OFF on Friday night as he scored 70 points to set a new #Suns record. (📷: @sportscenter)

As per Reddit User dantheman9758, also know as @WiltCArchive on Twitter, Chamberlain dominated pro basketball under a false identity while he was in high school.

Wilt Chamberlain secretly dominated professional basketball at age 16 under a false identity. Scoring as much as 46 points against pros in the Eastern U.S. with a team record of 36-1. By age 17 he was averaging 40.5ppg. This is the first time I'm sharing this research: from nba

"George Marcus" was the name Wilt played under, but according to these newspaper articles, he denied the entire thing when he was in college.

We imagine Chamberlain denied it because he didn't want to get into any trouble with the NCAA, as dantheman9758 pointed out in his initial post.

According to the book Quakertown, Chamberlain was allowed to play for the Fays because the Pennsylvania Athletic Association didn't have jurisdiction over the city schools at the time, so Wilt could play pro without losing eligibility.

If you're still not convinced, there's photo evidence to confirm the stories.

It's a fascinating story to say the least and it's one that looks like it's never really been told or pieced together before, but thanks to @WiltCArchive, it's out there for the sports world to enjoy.

The fact that he played pro at 16-years-old confirms just how incredible Wilt was and why he's one of the all-time greats.