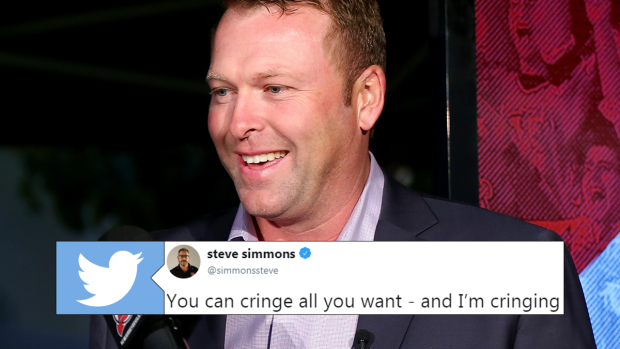 The Hockey Hall of Fame made announced their decisions for the 2018 inductees and one name has stuck out to a lot of fans in the hockey world.

Gary Bettman was announced as a builder in the 2018 class alongside Willie O’Ree, Martin St. Louis, Martin Brodeur, Jayna Hefford and Alexander Yakushev. While people were happy to see Willie O’Ree in there, they were less enthusiastic about the commissioner that has led the league through three lockouts.

Gary Bettman has been chosen as a 2018 #HHOF inductee as a builder. pic.twitter.com/suZWcyk6IL

Congratulations to the Class of 2018! #HHOF #HHOF2018 pic.twitter.com/KSwDIUKHQM

👍🏻 Willie O’Ree into the HHOF.
👎🏻 Gary Bettman’s. Sorry but expansion to 31 teams doesn’t outweigh 3 work stoppages, including a canceled season and his ostrich-like reaction to brain injuries.

Hockey will probably always be 4th in the US but Bettman has everything to do with that gap being significantly narrowed.

The NHL has grown by every metric under Bettman’s stewarship. Players, owners have been enriched. The game is improving and more entertaining for fans. Let the booing commence. League tradition dictates.

You can cringe all you want - and I’m cringing - but Gary Bettman belongs in the Hockey Hall of Fame. What he’s done for the business of the game is gigantic.

While he has been the commissioner for league lockouts, the league continues to expand and the decision to start a salary cap certainly seems to have been the right one. Still, we’re pretty sure no matter what he does he’ll get booed.

It will be interesting to see if that happens again at the induction ceremony.

Bettman on the dwindling boos: "You seem to be losing some energy. Let's pick it up." He drinks your tears.