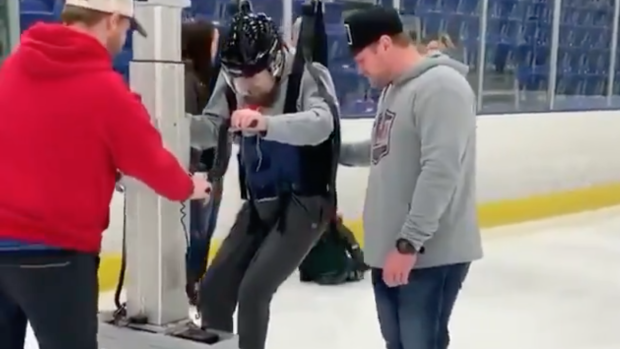 A 13-year-old Justin Rayner was playing hockey on December 2, 2004, in Saskatchewan when his life would change forever. Rayner suffered a serious neck injury that caused damage to his spinal cord, leaving him as a quadriplegic. He recounted the accident to Chel Home Ice.

“In 2004, I was playing in a bantam game and got the puck in our own zone, went off on a breakaway and kind of messed up my footing when I was trying to score and watch the puck instead of where it was going and unfortunately broke my neck sliding headfirst into the boards at the C -four and five positions which resulted in the spinal cord injury. I've been a quadriplegic ever since.”

Rayner went on to explain the following years as a roller-coaster of emotion, ranging from self-pity to doubt to embarrassment. In more recent years, he’s excepted his place in the world and used it to remain within the sport of hockey. He now works as a scout for the Moose Jaw Warriors.

On Tuesday, Rayner shared an awesome video from last winter that showed him taking the ice for the first time in over a decade and a half. The skates he’s wearing are the exact same ones he was wearing the night of his injury.

I broke my neck playing hockey December 2nd, 2004 at 8:36 pm. I hadn’t been back on the ice for 16 years. This was a really emotional and healing day for me last winter!

Same skates I was wearing the night of my injury - old school @BauerHockey Vapors pic.twitter.com/XEpe6LhzAm

These are the sort of videos that you love to see. It’s a real full-circle feeling, especially the fact that he’s wearing the same skates as he was way back in 2004.