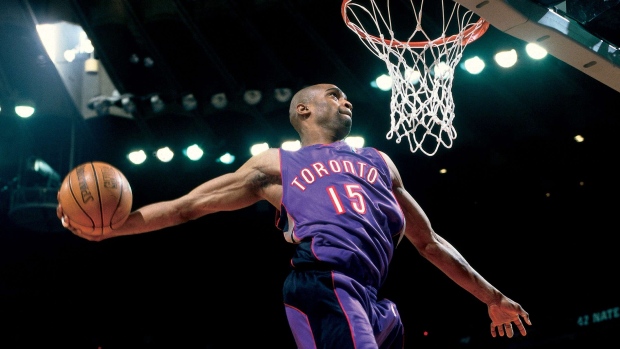 Despite not being Canadian, Vince Carter is widely credited as being the player that helped the Canadian basketball program grow into what it is today. From his audacious dunks, to his hyped shoe releases - Carter was beloved by an entire generation of Canadian basketball fans, inspiring them to go out and reach new heights (literally and metaphorically). Quite simply, he was a cultural force.

However, whenever the topic of the Raptors retiring Carter's jersey comes up, no one seems to be able to decide whether or not the NBA superstar is worthy of the honour. As basketball fans are well aware of, Carter left the Raptors in rather unceremonious fashion. In the eyes of some fans, that poor exit has tarnished his legacy.

While speaking with the Undefeated's Marc J. Spears in a piece titled "Vince Carter diary: Chapter 20, Part II," the topic of the Raptors retiring Carter's jersey came up, and the NBA veteran stated that he would like to see the team hang his number from the rafters.

Of course, I’d like for [the Raptors] to retire my jersey. You’d always like your jersey retired. That is where it’s started. There have been talks about it. People talk about it, and I’m very thankful for it. But for me, I try my best not to think about it because I am still of service in this league. At the end of the day, every player’s end result is to see their jersey hanging in the rafters somewhere. That is where it started. Hopefully I will get that opportunity. (Vince Carter - The Undefeated)

It's interesting to see the former Raptor talk about the possibility of having his number retired, but as for whether or not it will happen, we'll just have to wait and see. That will require some fans learning how to forgive and forget.