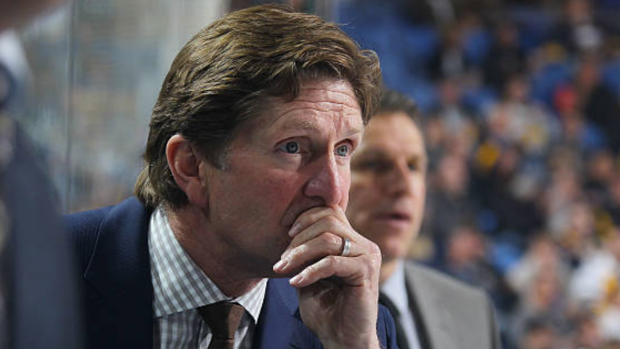 There are some things that are bigger than hockey, even for the people whose lives revolve around the sport. The hockey world was dealt a tragedy of massive proportions on Friday evening when the Humboldt Broncos, a SJHL team based in Saskatchewan, had its team bus collide with a transport truck. The crash resulted in 14 fatalities, and 14 more injured, while the hockey world rallies with their thoughts, prayers, and offers of support to the Broncos, their friends, and families.

One man ingrained deep into the game offered a teary-eyed perspective on the tragedy. Mike Babcock, head coach of the Toronto Maple Leafs, grew up in Saskatoon, Saskatchewan, which is only about an hour west of Humboldt. The incident struck Babcock close to home, and while addressing the matter to media, the usual Babcock-scowl was replaced with visual heartbreak.

This is certainly one of those moments where people put aside their playoff battles, their end of season push, and the game of hockey all together. Fans, players, and coaches everywhere reacted with shock and sympathy for everyone impacted by the horrible event.

Stars head coach Ken Hitchcock opened his postgame interview with a message to the @HumboldtBroncos and those affected. pic.twitter.com/0LS2IOwnAV

Thinking of the Humboldt Broncos and our friends in the hockey community at this terrible time. From Toronto to the Prairies, our thoughts and prayers are with you.

Our thoughts and prayers go out to the loved ones and community of the Humboldt Broncos. From our family to yours, we send our condolences and hearts during this difficult time.

The thoughts and prayers of the #NHLJets and all our fans are with the SJHL’s Humboldt Broncos, their players, staff, families and friends.

Our deepest, most heartfelt condolences go out to the @HumboldtBroncos. Our #Canucks family and the hockey world is behind you.

The @MapleLeafs send our thoughts and prayers to the entire @HumboldtBroncos community in this time. Hockey stands with you.

The @Senators extend their thoughts and prayers to the Humboldt Broncos, their families and the entire community. Hockey is a family and tonight we are all here for you.

The #Flames send their thoughts and prayers to everyone affected by the collision involving the Humboldt Broncos team bus.

Our thoughts, prayers, and condolences go out to the Humboldt Broncos and the families of those affected at this difficult time. The Canadiens and the entire hockey community grieves with you.