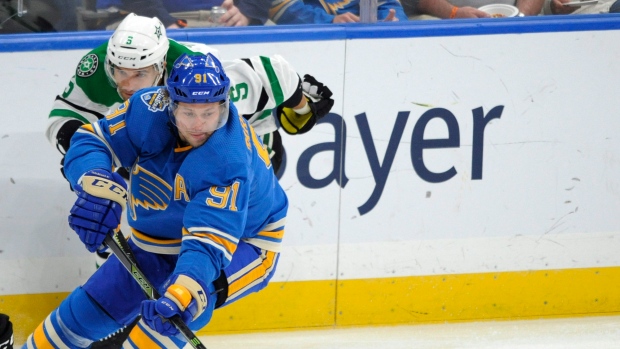 Following Alex Pietrangelo’s departure this offseason, the St. Louis Blues have announced Ryan O’Reilly as their new team captain. It appears, though, that this decision hasn’t pleased everyone in the locker room.

In an interview with Russian website Sport24, Tarasenko expressed disappointment that he wasn’t named the new team captain.

“Of course, when you play for eight years at a club and have been an assistant for a long time, you count on it. [Jaden] Schwartz and I have been playing for the longest at St. Louis of the guys on the team now,” said Tarasenko via Google Translate.

Unlike Tarasenko, O’Reilly has only played two seasons with the Blues, although he was the Conn Smythe Trophy winner in 2018-19 and led the team to a Stanley Cup that year.

Tarasenko's agent, Alexei Dementyev, previously criticized Blues management for selecting O’Reilly over Tarasenko for the captaincy a few days earlier. While Tarasenko acknowledges that he was disappointed and felt his agent had a right to share his opinion, he did suggest that he was trying to keep his focus on hockey moving forward.

“I think it's okay to count on certain leadership positions after eight years at the club. But everyone has their own opinion, Alexey expressed it and has every right to do so,” said Taranseko. “I personally focus on recovering from injury ... Because there are many people who say that Tarasenko will never play the same way. I have a tremendous incentive to come back and prove these people were wrong.”

The Blues are expected to place Tarasenko on the long-term injured reserve list before the season, following offseason shoulder surgery. He will be re-evaluated in February.