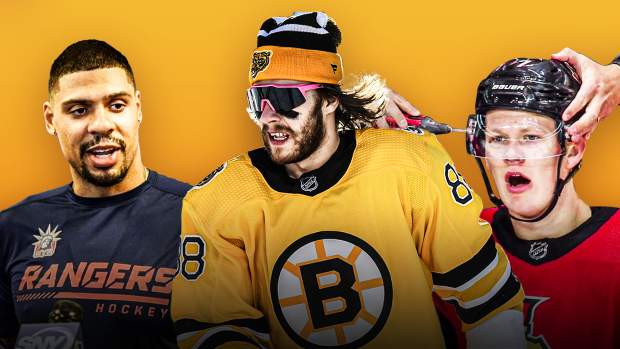 While league’s like the NFL and NBA are absolutely brimming with entertaining characters, one knock that seems to follow the NHL around is the lack of personality shown players. Anybody that’s been around the world of puck has likely seen it scrawled into some comment section at some point – “Hockey players are boring.”

While it may be true that hockey players are generally a little more watered down, at least in the public eye, that doesn’t mean there aren’t some characters. Whether it’s through their relationship with the media, the way they interact with teammates, or even their social media presence, there are a few shining stars when it comes to tickling your funny bone.

So, who’s the funniest? Well, we’ll let you make your own final subjective decision, but we have isolated 10 NHLers (as well as an honourable mentions section) that should be at least close to the top of everyone’s list.

Ryan Reaves is definitely one of those “love him, or hate him” players, but even the biggest haters can’t deny that he’s at the very least hilarious. Reaves’ comedic personality came out on full display when he was playing with the Vegas Golden Knights, and it has undeniably carried over to his time with the Rangers.

Just look at what he’s done this week:

What contributed to Ryan Reaves' 2-goal night vs. the Leafs?

Part of the reason Reaves is able to joke around unabated is because literally no one can tell him not to. We’re pretty certain the guy has never backed down from dropping the gloves, so if you’re not happy with his jokes (or specifically, his chirps), you better be ready to put your money where your mouth is.

Oh boy. Ryan Reaves on Thornton’s reply to the Nosek hit: “I’ve got a buddy with a grandpa who’s going through the same thing. He can’t see very well because he’s getting old. Needs glasses. If he gets suspended he’s going to have a hard time seeing from the press box” #VegasBorn

While Marchand has a knack for getting under his opponent’s skin, a knack that actually carries over into opposing fan bases, he is also a player that isn’t afraid to mix it up in the comedy ring. While he’s had a number of funny press moments, one thing that really separates Marchand from the pack is his social media presence.

Guy goes IN on people like it’s his day job.

Is it time to shave the Laine beard yet? 🤢 @pastrnak96 https://t.co/sOCiXr0Nga

He's also refreshingly honest, with a flare of self-deprecation mixed in there as well.

Brad Marchand, 33, on if he has had any thoughts on how long he wants to keep playing:

“Until they boot me out of the league. With my history, could be tomorrow.”

The Boston Bruins are the only team to have two players make this list, because we simply could not leave Pasta out. One of the smiliest players in the NHL is always good for a soundbite, and he’s not afraid to dress the part of class clown either.

David Pastrnak: "We were listening to Barbie Girl before you guys asked me to do media. I was kind of dancing with these glasses out in the locker room then you guys ruined it & I had to go answer questions.

"So I missed the Barbie girl song." pic.twitter.com/OgbiDsbxFx

He's also not afraid to square off on social media, as seen numerous times with Bruins teammates.

No wonder you don’t let your beard grow pic.twitter.com/41WdQhxpPe

Overall, Pasta seems like he’s just a really fun guy to be around…

We’re kind of cheating here, but we’re just going to lump the Tkachuk brother into one spot because they actually make each other funnier. While our subjective opinion would sit with Brady being slightly funnier, Matt is certainly not afraid to get a little zany with it.

Brady Tkachuk, giving the people what they want 😤 pic.twitter.com/BVrrH1Prcx

Matthew Tkachuk reminding Brady that he's also got a letter on his jersey 😂 pic.twitter.com/QUxoyBcfpl

Look no further than the Washington Capitals Stanley Cup summer for a seemingly unlimited amount of content featuring Ovi being hilarious. We don’t even know where to begin with this guy, everything he says seems to be hilarious.

Maybe this list is unnecessary. Maybe the answer is just simply Ovi.

Phil the Thrill isn’t necessarily hilarious because of the things that he says, it’s almost more just about who he is. From all the memes that have made the rounds, to his embrace of the hot dog label that follows him around, Phil seems more than willing to be the source of laughter. Whether it’s intentional or not!

Happy Thursday everyone, here’s a little bit if cleansing for the timeline. Hope you’re as happy as Phil Kessel and a hot dog filled Stanley Cup!@PKessel81 pic.twitter.com/Y4vPX1n6aR

Phil is always good for a Thrill, but Phil can also always be counted on for a laugh.

While Laine has been a little bit spotlight-shy over the past couple seasons, he first came into the league like a comedic wrecking ball. The Finnish sniper has become known for a number of funny reasons, including his love of Fortnite, his outfits, and his hilariously honest opinions on matters.

Here's @PatrikLaine29 on his "textbook top cheese" goal and the Gordie Howe hat trick he's going for in the third.#CBJ | @DMaetzMedia pic.twitter.com/NiDwsSHAfi

Laine is still finding his footing a bit in Columbus, but we’re sure that when his game starts clicking on all cylinders, so will his hilarity.

Possibly the league’s most likeable guy, the tendy known endearingly as “Flower” is somewhat of an elder statesman when it comes to funny NHLers. He’s been around the league a long time, and he’s always joking around, pulling pranks, and making both teammates and fans smile.

Marc-Andre Fleury: "You should change things up and write about what an asshole I am, something like that."

How 'bout that ride in? pic.twitter.com/DGo88YrGlp

While we may not be at the top of our list when it comes to being funny, Fleury is so likeable it would be wrong not to include him. With 2022 potentially being his final seasons, we’re Flower’s long career for all we can get.

Jumbo Joe Thornton has gotten more and more hilarious as his career has gone on. As his NHL playing days mature, and as his beard greys, his quick-wit and edgy humour seem to sharpen as well.

While Thornton remains a player that just about everyone would love to see win his first Cup, there’s no doubt that the twilight of his career is upon him. He’s having fun with it!

Video of the year goes to the Sharks 😂😂

Thornton and Burns were pretty hilarious during their time together on the San Jose Sharks, especially because of the fact that they have long been sitting side by side atop the NHL’s beard power rankings. While Jumbo has taken on the dad humour, Burnsy has been hilarious in his own right – with and without Thornton by his side.

Even the Harry Potter tattoo that's permanently etched into his thigh is pretty funny.

As promised, we’ll include a list of honourable mentions as well. While the following list of players didn’t quite crack the list, they similarly show up as usual suspects when it comes to comedy in hockey:

Just for the heck of it, let’s toss in a newcomer as well…

So, who do you think is the funniest? Let us know @BarDown or make your pick in the story’s comment section on Facebook!

Also feel free to let us know who we missed, we’re always down to be pointed in the direction of a good laugh.