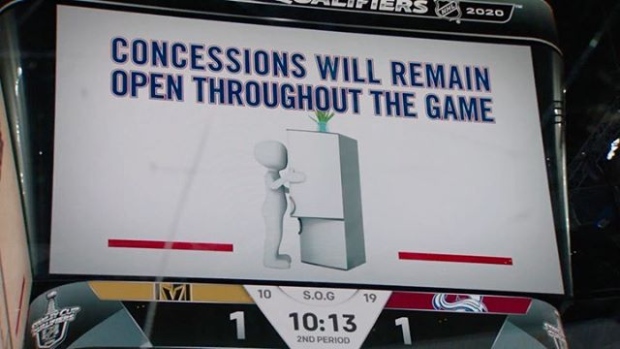 Just because there aren't any fans in the stands, doesn't mean the NHL stopped catering to its audience - the jumbotron has some pretty hilarious dad-esque jokes.

Typically the jumbotron's at sporting events are catered towards interactions with the audience whether it's a kiss cam, a hilarious dance-off moment between fans, a noise-o-meter, a proposal, or a birthday wish, there's always something to get the fans going.

With the coronavirus pandemic still at the forefront of everyone's minds, the league is continuing to ensure the safety of players, staff, and beloved fans which means the stands are empty during this year's Stanley Cup playoffs, BUT the jumbotron is still dedicated to those who are watching.

During a Golden Knights-Avalanche game, the jumbotron was giving a friendly reminder to everyone watching from home.

Anyone else grabbing a snack for these #StanleyCup Round Robin games?

This isn't the first time though, the jumbotron has jokes

No need to get off your couch. 😂 #StanleyCup pic.twitter.com/R9h9Sa7s5M

Please take your time on the way out. 😅 . (📷: Twitter/TomGulittiNHL)