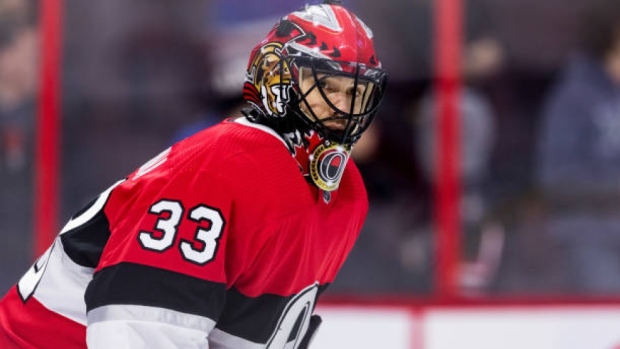 Mike McKenna has seen some uncertainty over the last couple of days. Just days ago, he was the backup goaltender for the Ottawa Senators, until the team traded him to the Vancouver Canucks on Wednesday, upon which he was informed that he would be assigned to the AHL’s Utica Comets. The Canucks’ plan, however, was disrupted by the Philadelphia Flyers, who claimed McKenna off waivers — and that appears to be where the dust will settle.

While it may seem ordinary to fans to see a fringe NHLer bounce around from team to team, Rachel McKenna, wife of Mike, took to Twitter with a lengthy thread to offer her perspective, and the perspective of her family, on the trade’s fallout. It’s a thoughtful, and measured, inside look at life around the NHL.

Hi, everyone. I know I’ve done a fair amount of complaining lately, but I’m truly grateful for the career and opportunity Mike has had these 14 years. Any chance he has to be in the NHL is a special and amazing one and I’m fully aware of how incredible it all is.

That being said, I have a 2 year old who cries and occasionally thinks her daddy doesn’t love her anymore because he hasn’t lived with us in 2 months. She can’t understand how special what her dad does is. And her tears and heartbreak are devastating to witness.

I have a 5 year old whose dad is her hero and she misses him so much. She’s trying her best to be positive, but when he only has a couple of minutes to talk because it’s game day and it’s been weeks since she’s seen him, she can’t understand why he won’t talk to her longer.

I am doing everything in my power to keep my kids happy, engaged, and understanding of how much their dad loves them and how cool it is that he gets to play hockey for a “job” at all. But they’re little. They just want dad around to give them hugs, to see their school concerts...

...to see how hard Kenlin is working on her skating at lessons so she can be a goalie like her hero, to read them a bedtime story, and so much more. Our situation is not unique. There are lots of families out there in worse positions. I get that. I understand it. They don’t.

So please understand that any complaining comes not from me trying to be greedy, or selfish, or disliking hockey or any of the organizations Mike has put a jersey on for, but because of our kids. We love and cherish what hockey has given us. It’s just not always easy.

On a positive, at least we are at our house in Belleville and don’t have to risk flat tires and snow storms to get home! 😂 #itsthelittlethings

And my gosh the stories we have! The people we’ve met! The places we’ve lived and visited! The pride I have in my husband for all his on and off ice accomplishments! There is so much to love about our life. I wouldn’t trade it for anything. ❤️

Player movement is a reality in the NHL. On a surface level, we know that it can be hard for families to pack up and to move around constantly, but at the same time, we don’t really know it, not in the specific ways that the McKennas can attest to. While the league will still function the way it functions, perspectives like these aren’t often heard, and in that way they’re pretty valuable.

For the injury-ridden Flyers, McKenna would be their league record-tying seventh goalie to be used this season — and with so much season left to go, they might just shatter that record outright.

Meanwhile, the Canucks will have to find someone else to fill the position in net at the AHL level, but it isn’t going to stop them from calling up a prospect that fans hope to be the goalie of their future: Thatcher Demko.