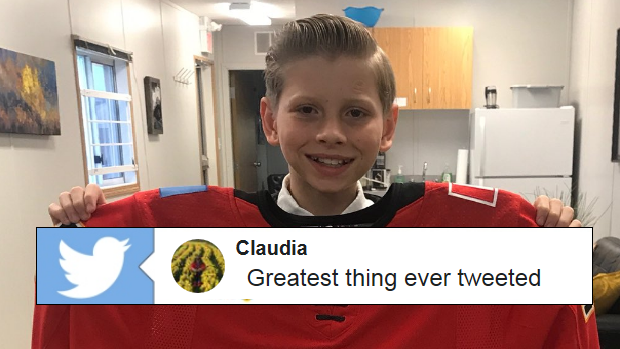 11-year-old Mason Ramsey is living a dream right now, travelling the world to show off his unique country voice. The Yodeler has already performed at Coachella and his Instagram account has an astounding 2.4 million followers.

The Golconda, Illinois native took his talents North of the Border to perform at the infamous Calgary Stampede, where he sang his heart out at the city’s notorious country bar ‘Cowboys’. During his trip, the Calgary Flames gifted Ramsey with a Flames jersey with none other than 'Tkachuk' stitched onto the back.

So apparently 'Yodel Boy' is a hockey fan... . (Via: Calgary Flames/Twitter)

A pic for the ages.

Flames fans had all sorts of reactions after the team posted the photo on their Twitter account.

@BarstoolBigCat watch out for him in thr nhl next year

If you’re set to hit a Yodel Boy show in the near future, don’t be surprised if he hits the stage in a Flames jersey.

shout out to @whethanmusic for bringing me out at @coachella. What a dream! 📷: @takkamihagi