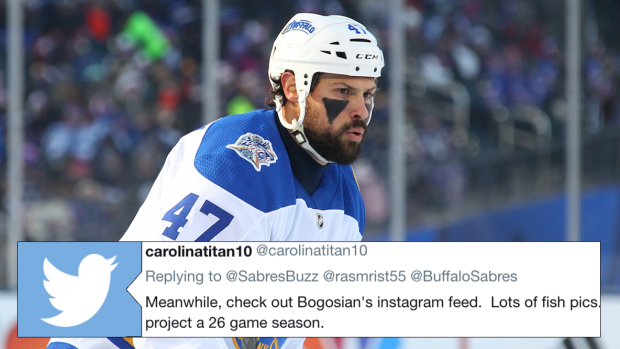 Every athlete has their own way of dealing with Twitter trolls.

Some players like Brad Marchand, for example, respond back and put those trolls on blast.  Others simply ignore the keyboard warriors knowing it's not worth their time to respond.

There are also those athletes who respond in an unexpected way and that's exactly what Zach Bogosian of the Buffalo Sabres did when someone on Twitter tried to criticize him for enjoying his offseason.

I️ invite you to come workout with me when im back in Buffalo. If you don’t throw up I’ll buy you season tickets for the year. https://t.co/cHx4U0Jk5R

Rather than fire back at this fan and make fun of him like Marchand might, Bogosian decided to make him an offer anyone would jump at.

The person that criticized Bogosian in the first place jumped at the offer, too, but tried to find a loophole to get season tickets.

I'm totally gonna fast for 5 days beforehand. No one said anything about passing out and needing a defib.

Bogosian responded with this and the fan hasn't responded directly to this tweet:

You in? You need to finish the workout. https://t.co/vjv12EB5OL

We really hope that @carolinatitan10 accepts the challenge and Zach gives the fans a way to watch the workout because that's going to be must-see!

For now, though, Bogosian will just continue to enjoy the offseason and get ready for what Sabres fans are hoping for is a better season from a team standpoint.

Haven’t laughed this hard in a long time. Happy 4th!

The boys had a day!