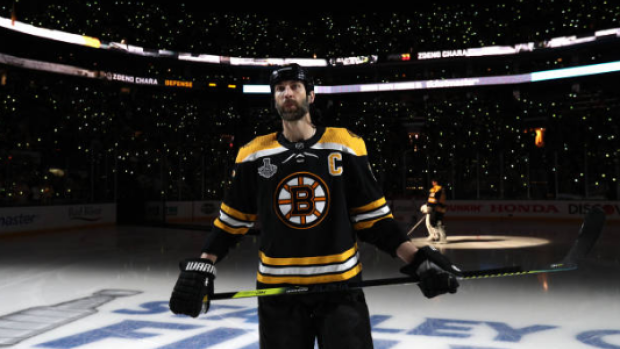 In order to last over two months in the gruelling Stanley Cup Playoffs, you must be willing to sacrifice your body and lay it all on the line.

Even though Zdeno Chara is the biggest hockey player to ever play, he, surprisingly, still feels pain even though he's a gigantic behemoth out on the ice.

During the final stages in Game 1 of the Stanley Cup Playoffs on Monday night, Chara suffered a cut on his left forearm after blocking a rocket of a shot off the stick of Vladimir Tarasenko.

Chara was hunched over in a considerable amount of pain, as he headed for the dressing room with blood leaking down his wrist.

You can watch the video here:

Come post-game, Chara was asked about the injury and stated it comes with the territory of playoff hockey.

Chara missed Game 4 of the Eastern Conference Final against Carolina and took advantage of the team's 10-day break in between the Stanley Cup Final.

Chara finished with 19:38 of ice time and registered one assist with a shot on goal, two hits and two blocked shots.

The Boston Bruins rally back and score 4 unanswered goals to take Game 1 by a score of 4-2 over the St. Louis Blues. pic.twitter.com/NMDopMtSwl