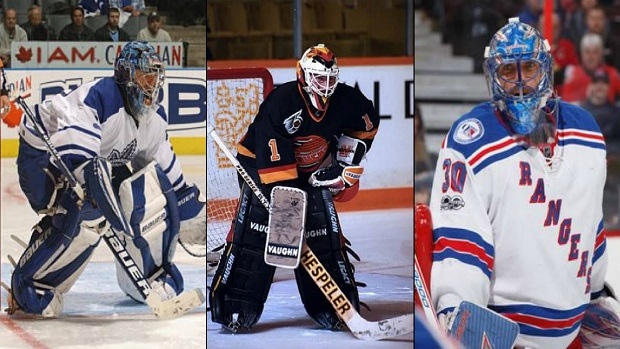 It’s hard to win any championship, but the Stanley Cup is by far one of the toughest trophies to win.

Thanks to late goal allowed vs OTT in Gm1, Henrik Lundqvist came up shy of another heroic playoff win. Nonetheless he now does top this list pic.twitter.com/J6ThRpb3M2

Here are 10 other goalies who have won at least 30 NHL playoff games in their career but never won the Stanley Cup.

Jon Casey made it to the NHL playoffs as a member of the Minnesota North Stars (4), Boston Bruins (1) and St. Louis Blues (2) and finished with a career playoff record of 32-31. The closest he came to winning the Stanley Cup was during the 1990-91 season with the North Stars lost to the Pittsburgh Penguins in 6 games in the Stanley Cup Final.

Don Beaupre saw plenty of action during the NHL playoffs, as he made the postseason with the Minnesota North Stars six straight seasons, five straight seasons with the Washington Capitals, and one season with the Toronto Maple Leafs. In 72 playoff games, Beaupre finished with a 33-31 record with the Conference Finals being the furthest he ever made it.

Kirk McLean and the Vancouver Canucks were so close to becoming Stanley Cup champions during the 1993-94 season, but they fell one game short in the finals. McLean posted a 34-34 playoff record during his career and made it to the Stanley Cup Final once.

Shit I'm running out of professional athletes to relate to with no championships..... #sergioooooooooooo

When Roberto Luongo was traded to Vancouver, Canucks fans were over the moon as they had just received one of the best goalies in the NHL in his prime. A few years later, he stood on his head for the Canucks as they went all the way to the Stanley Cup Final. Unfortunately for Luongo and the Canucks, they fell short against the Boston Bruins in Game 7.  Luongo currently owns a 34-35 career playoff record.

Toronto Maple Leafs fans still think about Wayne Gretzky’s high stick on Doug Gilmour during Game 6 of the 1993 Western Conference Finals. They believe that was their year to win it all and it was Felix Potvin backstopping them throughout the playoffs. As  a young 21-year-old, Potvin got the job done for the Maple Leafs and nearly got them to the Stanley Cup Final. During his career, Potvin posted a 35-37 playoff record.

Pete Peeters made it to the playoffs nearly every season of his career. He made it with the Philadelphia Flyers (3), Boston Bruins (3) and the Washington Capitals (4). His best opportunity to win the Stanley Cup came during the 1982-83 season, but the Bruins fell short in the Eastern Conference Finals to the eventual Stanley Cup champion New York Islanders. Peeters owns a playoff record of 35-35.

Kelly Hrudey saw plenty of playoff action during his career. He made it to the postseason with the New York Islanders (4), Los Angeles Kings (5) and San Jose Sharks (1). He posted a 36-46 playoff record, with his best opportunity to win it all coming during the 1992-93 season when his LA Kings fell to the Montreal Canadiens in five games.

Evegni Nabokov went three straight seasons of posting 40-plus wins, but he never really showed up the same way in the postseason. Nabokov made the playoffs with the San Jose Sharks (9) and New York Islanders (1), but never managed to make it to the Stanley Cup Final. He owns a 42-42 playoff record.

There’s no doubt that Ron Hextall was a game changer for the Philadelphia Flyers. In his rookie season, Hextall backstopped the Flyers all the way to the Stanley Cup Final, but they ran into a powerful Edmonton Oilers team that beat them in seven games. That was his only trip to the Stanley Cup during his career, and he posted a 47-43 playoff record.

A lot of people want to see the New York Rangers win the Stanley Cup just for Henrik Lundqvist, but Curtis Joseph probably isn’t one of those people. At 63 playoff wins and no Stanley Cup, CuJo is the all-time leader in playoff wins without a Stanley Cup victory. He posted a 63-66 playoff record during his career, but never managed to make it to the Stanley Cup.

If the Rangers advance to the Conference Finals this season, Lundqvist will tie Joseph for most playoff wins without a Stanley Cup. If the Rangers go all the way and fall short, he’ll become the new leader of a record no goalie wants to own.