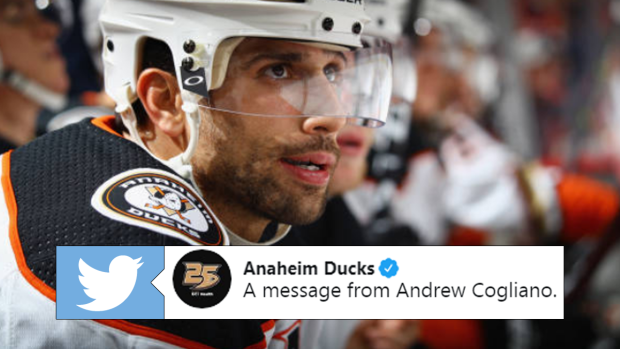 Andrew Cogliano had been a member of the Anaheim Duck for eight years up until Monday when he found out he’d been traded to the Dallas Stars. It’s not the first time he’s changed teams, as he began his career with four years in Edmonton, but this move is particularly emotional for the reliable grinder.

That’s because he made the most out of his eight years with the Ducks. Quite literally, in fact.

Cogliano became known for his unbelievable ironman streak. He had not missed an NHL game in over a decade of NHL play until being suspended by the NHL for a hit that many thought was not warranting. All in all, the suspension ended an 830-game ironman streak.

In a game locked and loaded with physicality, this kind of streak is almost unheard of. While he was never topping out the Ducks scoring sheets, Cogliano was a reliable grinder for them that became a staple of the team.

On Monday, Cogliano left an emotional message to the Ducks organization and its fans.

A message from Andrew Cogliano. pic.twitter.com/KxpilsqwKh

Cogliano was dealt in exchange for centre Devin Shore. Shore, a lower line forward, has played 42 games with the Stars this year, amassing five goals and 12 assists during that time. He is 24 years old, and with Cogliano now 31 years old and only amassing 11 points in his 46 games so far, it could be a good deal for the Ducks.

Saying that, it still makes your heart hurt a little... well, a lot...

Thank you for always being a leader on and off the ice, Cogs. We’re going to miss you. pic.twitter.com/oVtDJphxEW

Love you Cogs! Wish you nothing but that best and thank you for putting in effort every shift!

Pure class, thanks for all your time, dedication, and #cogsfordogs

Gonna miss your effort, speed and heart you put in every single night.

Always a class act. We will miss you Cogs. Good luck in Dallas.

Thank you Cogs for an amazing 8 years! Good luck in D!

So classy - we will miss you Cogs!!

Thanks foe the memories. You'll always be one of my favorite Ducks!

It showed in all you did on the ice and off of it. You'll always be part of the Anaheim Ducks fans family. Best of things to you Cogs 🧡

We love you cogs pic.twitter.com/LPWDMDjhoK