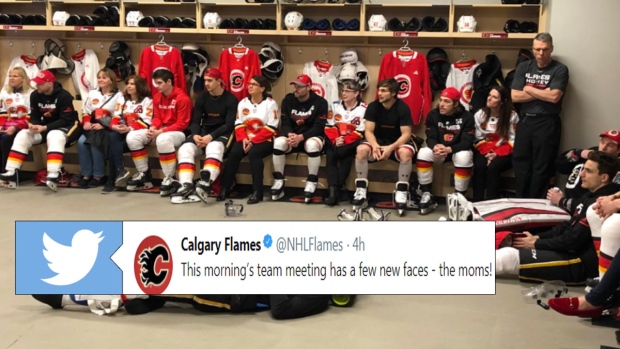 One thing that has become an annual thing across the NHL over the years is the fathers trip, but there’s a new tradition starting across the league.

The Calgary Flames will kick off a two-game road trip in Las Vegas on Wednesday night and they’ll have some extra support in the crowd as they’re hosting the first ever moms trip in franchise history.

The first stop on our Mom’s Trip! pic.twitter.com/pM3fwzWBOx

The team landed on Tuesday afternoon so the players and their moms got a chance to check out the city before calling it a night. After all, they needed to be sharp for the morning skate.

The moms are off to the morning skate! pic.twitter.com/8CAi1y711n

The moms are ready for the morning skate! pic.twitter.com/PZdOXFfx6K

They weren’t just there to watch the practice, though, as they switched up roles and found out what it’s like to get interviewed.

Following the skate they joined the team in the locker room and got to see what the guys go through the morning of a game.

This morning’s team meeting has a few new faces - the moms! pic.twitter.com/cFggO9o3RZ

The morning wrapped up with a tribute video, and you can bet there weren’t many dry eyes in the room after it aired.

The #Flames had their moms attend this morning's pre-game meeting and ended it by showing them this video. pic.twitter.com/xudJtxRX8Y

The Flames will take on the Golden Knights on Wednesday night before wrapping up their two-game road trip in Arizona on Thursday night.