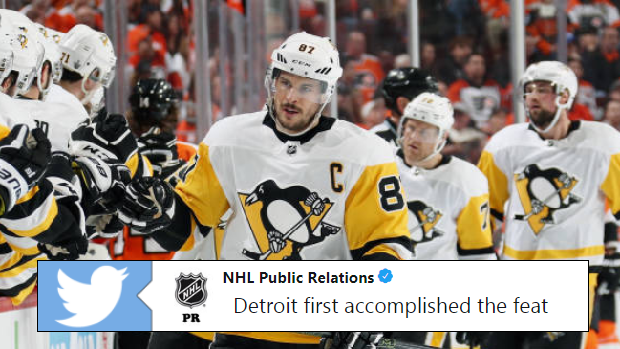 The Pittsburgh Penguins snapped back to reality with a convincing 5-1 victory over the Philadelphia Flyers in game 3 of their first round Eastern Conference series.

The Pittsburgh @Penguins defeat the Philadelphia @NHLFlyers 5-1 in Game 3 to take a 2-1 series lead. #StanleyCup pic.twitter.com/vspw1HVKIl

After pounding Philly 7-0 in Game 1, the Pens suffered an ugly 5-1 defeat in game 2 at home. Game 3 told a different story, as Sidney Crosby contributed to four of Pittsburgh’s goals in the victory. The Penguins led just 1-0 after one but quickly ran away in the second period, thanks in part to back-to-back goals nearly seven minutes into the frame. With assists on both goals by Evgeni Malkin and Brian Doumoulin 6:48 and 6:53 respectively, ‘Sid the Kid’ helped the Penguins tie the record for fastest consectuive goals in playoff history. The Detroit Red Wings previously held sole possession of the feat.

The @penguins scored two goals in five seconds to match the NHL playoff record for the fastest two goals by one team.

Crosby’s four points also tied his previous career high. He currently sits second among all postseason players with 3 goals & 4 assists in just three games and is one point away from tying Mario Lemieux’s franchise playoff record with 171 points.

Crosby has two Conn Smythe trophies under his belt and could take home a third if Pittsburgh can make another playoff run. Bruins forward David Pastrnak is also in contention with 9 points in just 2 games.

It’s hardly a surprise to see the NHL’s most dominant organization over the past two years setting records. They are hoping to become the first team since the Islanders dynasty of the eighties to win three consecutive Stanley Cups.